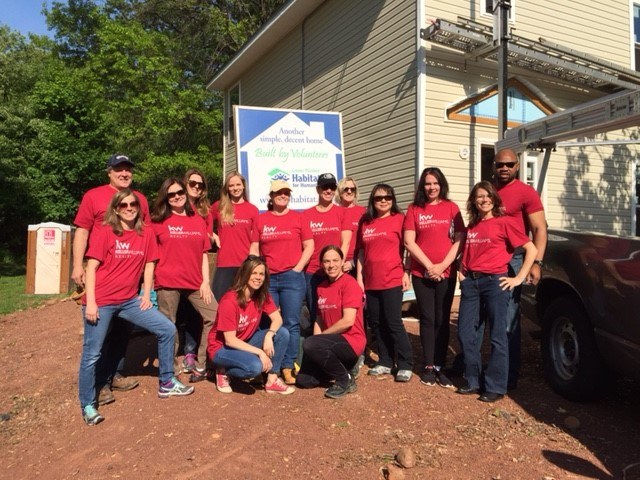 In keeping with Keller Williams Realty International’s mission to build lives worth living, a dedicated group of associates from the Clarksville, Tenn., market center put their busy schedules on hold to ensure an injured Iraq war veteran could live a better life – in the comfort of a brand-new home. More than 60 Clarksville associates and their families worked through five days and four nights to help construct a new house for Army Master Sgt. Luis Rodriguez and his family as part of the ABC television hit show, “Extreme Makeover: Home Edition.”

“We had more agents volunteer than we knew what to do with,” Market center Owner Maurice Vaughn says. “Some of these people would come out and work from midnight to 6 a.m. and then go home, shower and go off to work. It was just amazing.”

In 2004, Rodriguez, an Army medic, lost his right leg when a roadside bomb struck his convoy that was en route to a hospital. Rodriguez spent four months in an amputee ward and endured 16 surgeries before returning home to Tennessee to discover that his small house did not accommodate his new physical challenges.

When ABC selected the Rodriguez family for a home makeover, the “Extreme
Makeover: Home Edition” designers tapped Clarksville contractor Clay Powers, a longtime business associate of Vaughn’s, to lead the project.
“I immediately asked Clay how we could help,” Vaughn recalls. “Because it was such a heartwarming effort, it was the kind of situation that Keller Williams Realty needed to be involved in.”

Keller Williams Realty International CEO Mo Anderson traveled from Texas to
Tennessee to witness the Clarksville market center in action. She says she saw a “sea of Keller Williams agents” upon arriving at the construction site. Not only were the associates responsible for staffing the only entrance to the secured television set, but they also handled errands for supplies and prepared and delivered meals to the workers.

“I believe if anybody has ever displayed their outstanding leadership abilities, it’s Maurice and Terri Vaughn,” Anderson says. “Believe me, it took strong leadership to pull this off. I am so proud of the Vaughns and their team, my buttons are about to pop off.”

Vaughn’s son, Jon, an associate in the Clarksville market, says he estimates his team members clocked more than 1,500 hours of volunteer time. “I personally logged 125 hours in five days, sleeping in my truck most nights,” he admits. Anderson says she watched the Clarksville associates as they worked nonstop in the boiling summer heat, sacrificing time normally spent with their families and clients. “But when the Rodriguez family stepped out of that limousine and saw their new home for the first time, I understood why our agents did what they did,” Anderson says. “It was
one of the most special moments in my life.”