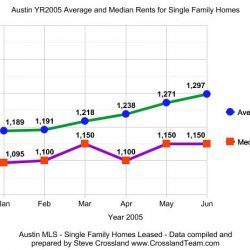 Average rents in Austin are rising each month in 2005 according to MLS Leasing stats. It’s too soon to know if this marks a turnaround for the Austin Rental Market, but the trend is encouraging for residential landlords and Property Managers. See the graphs and details below. Despite improvement, Austin’s rental market has not yet returned to the rental rates enjoyed in 1999! Average Days on Market for Leased homes was 62 Days

Average Price per square foor of rented homes in Austin was $0.69.