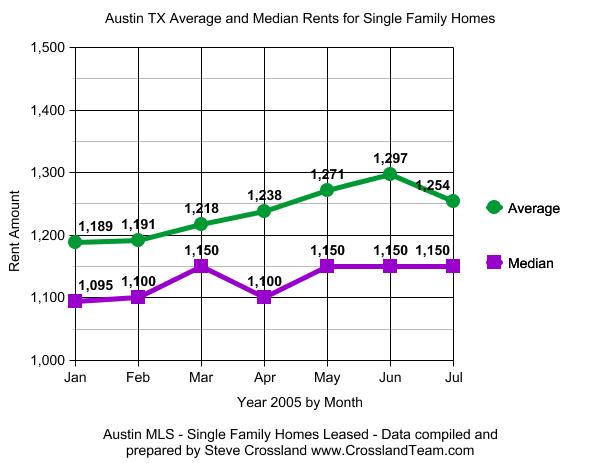 Average rents for houses in Austin turned downward again in July according to MLS data. The 2005 YTD rents are again below the 2004 levels. Investors continue to supply Austin with excess rental inventory, keeping the rental supply at just below 3 months inventory as we head into the slower Fall season.

Average 2005 median rents remain at $1150, the same level as the 2003/2004 median rents. See graphs below or download a printable pdf version of this report here. The graph below shows that our average Year-to-Date rental rates fell $10 (from $1252 to $1242) from last month’s YTD average, taking us again below the 2004 rental rates of $1247. If 2005 does not achieve a better average rental rate than 2004, it will mark the fourth consecutive year of falling rents in Austin. This doesn’t seem to be slowing down investors who think Austin has tremendous appreciation potential over the next 5 years, and are willing to accept negative less cash flow while betting that the appreciation in values will, in the long run, outrun the annual cash flow losses. Download a printable pdf version of this report here