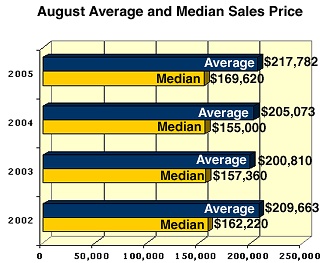 Austin continues to see sales activity supporting the notion that Austin is headed toward a seller’s market. There are 4 key indicators of a tightening market – Number of Homes Sold, Active Listings, Average and Median Sales Prices, and Average Days on Market.

All four of these indicators are moving in the direction of a tightening market. Let’s take a closer look.

Active Listings
August 2005 = 8302
August 2004 = 9824
This is a year over year decrease of 16%, meaning there are fewer homes on the market for buyers to choose from. This while the number of sales is increasing. If these four indicators continue to move in the directions seen above, by next summer, if not sooner, Austin should be at or approaching a seller’s market, which in turn will mean higher prices. Feel free to call me at 512-301-5811 if you have any questions about Austin’s real estate market.