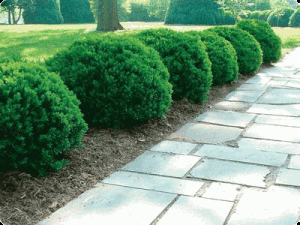 We have a listing with an odor problem at the front porch. The seller assumed it was the neighbor’s cats coming around and spraying her front porch, and she’s been putting up with it for years. We’ve taken steps to mitigate the smell, but when I showed up this morning to open the home for a Keller Williams Realtor tour, it reeked at the front entry. “Darn” I thought. “Those blasted cats are back again”.

With no time to do anything about it, I made the best of it and hoped the smell would not overshadow the fact that the home is spic and span, staged well, and ready for move-in. Sure enough though, one of the agents walked in and said “pew! It smells like cat pee out there!” Another responded with, “that’s not cat odor, it’s the boxwoods”. Huh? She took me out and showed me the nice hedge that runs the length of the sidewalk leading to the entry and told me they are Boxwood shrubs and that they are known to emit an odor that is often mistaken for the urine of a male cat.

I stuck my nose down and took a good sniff and she was right, that shrub stinks! “How do you know the cats haven’t sprayed the shrub and that’s why it stinks?” I asked. She said she knows a lot about plants, and that the smell is the boxwood plant itself, not cats. A bit of internet research confirms this. It isn’t helped by the fact that the front porch is covered and enclosed on three sides – a nice place to sit on a bench but it doesn’t allow a breeze to blow through.

So, now we have to figure out if the smell can be controlled somehow, otherwise it’s creating a bad first impression and we may have to rip out those shrubs. We live and learn. Never put boxwood hedges near your front door. Leave them out further in the yard or you might have the same problem some day when you try to sell your home!

24 thoughts on “Boxwood shrub can stink up your Sale”