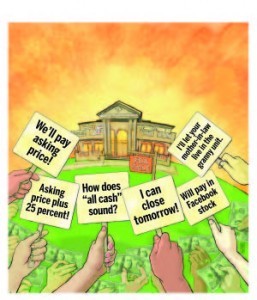 Here is another article (see below) from today’s Austin Statesman. It reflects what Sylvia and I have been experiencing – we’re having a harder time finding good clean homes for our buyers. The best homes that are priced right go fast and sometimes it takes a few lost deals before a buyer builds enough trust in our recommendations to believe us when we call and say “you need to write a full price offer on this one right now. I’m emailing the contract to you and you need to get it back right away”. Or “you need to come see this house before lunch – bring your checkbook”.

It’s an odd delima. We’re both long-time laid back South Austin people. Getting people to hurry up and make a snap decision isn’t very South Austin-like, but we’d be lousy Realtors if we didn’t help our buyers get into that frame of mind from the outset.

The already white-hot Central Texas housing market continues to heat up, despite rising interest rates and faltering sales elsewhere in the country. Sales of existing single-family houses rose 18 percent in March compared with a year earlier. For the first three months of the year, sales are up 14 percent and the median price is up 8 percent to $167,140.

But the market is getting tight for buyers; active listings fell 9 percent last month.

“Houses are selling faster than the new listings are coming on board,” said Sharon Stanberry Rosshirt, president of Stanberry & Associates, a real estate agency. “That’s going to put pressure on prices. There is a continued influx of people from other places and continued demand, but the supply on the resale side is not keeping up with sales.”

Demand is exceptionally high in central, older neighborhoods such as Hyde Park, Rosedale and Travis Heights. Multiple offers are common, and Stanberry agents have fielded as many as 22 offers on a single property.

Sales were up 43 percent in the area that includes the Travis Heights and Bouldin Creek neighborhoods, boosting the median price there by 41 percent to $260,680. But the number of houses on the market increased 30 percent.

With a sharp drop in the number of homes on the market, sales fell 7 percent in Southwest Austin, but the median price rose 19 percent to $234,020. The number of active listings dropped by 34 percent in the area, which is popular with first-time buyers.

“The moment that news hit the street, it was just like a floodgate of investors calling and e-mailing,” said Buddy Schilling, president of JB Goodwin Realtors. “There were investors in the marketplace since November or December of last year, but once that Samsung announcement was made, the fence-sitters got off the fence too. There is a lot of California money in town.”

All of the activity is putting the pressure on home buyers to act decisively. “I wouldn’t say what we’re seeing right now is a frenzy, but it is very fast-paced,” Rosshirt said. “Buyers really need to kind of have their ducks in a row, have their financing lined up and be prepared to move quickly when they find something that they like.”