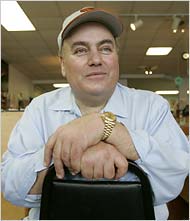 When I moved to Austin in 1985, it wasn’t long before I found myself in Antone’s blues club on Guadalupe Street north of the U.T. campus. I’d never been in a live music club like it before, there was something special about it. I loved that place and I loved the music. I even met a past girlfriend there who, much to my stunned disbelief, came up and asked me to dance. I was single and 23 and Austin was heaven. Now I’m married in my 40’s with two kids (10 and 13), don’t drink or smoke, so I’m sorry to say Sylvia and I don’t make it out to Austin nightclubs much anymore and haven’t been inside Antone’s for more than 10 years. But whenever out of town clients ask me where to go for some live music in Austin, I ask “do you like the blues?”. If so, I send them to Antones.

Now Clifford Antone has died. He helped make Austin music what it is, and thus helped make greater Austin what it is today – the “Live Music Capital of the World”. He’s just as important to the culture and history of Austin as Michael Dell, the Capital, Barton Springs or any of our other Austin icons. The Austin Statesman has a nice story on him today, which I’m reposting below. It’s a good read about a very big hearted man.

Antone: ‘Heart of Austin music’ had blues in his blood
Impresario nurtured musicians and city to national prominence

A giant, an institution, a generous soul whose obsessive love of the blues helped make this college town nationally known forstomping-goodlive music and passionate listeners is gone.

The news shot through the Austin air Tuesday afternoon like a stinging Albert King guitar lead: Clifford Antone is dead.

By giving Chicago blues legends a club in Texas to play, as well as launching a raucous classroom where upstarts such as the Fabulous Thunderbirds, Charlie Sexton and Stevie Ray Vaughan could learn at the feet of the masters, Antone forever changed the Texas music landscape. He was 56.

Police spokeswoman Laura Albrecht said officers responded to a call at the Towers of Town Lake condominiums on Interstate 35 approximately 1:15 p.m. Tuesday. They found Antone dead in his apartment. The cause of death has not been determined, pending results of an autopsy, though police said the death did not appear suspicious.

A celebration of Antone’s life is planned for his namesake club for 4 p.m. Wednesday. It will be free to the public.

“It’s a terrible shock,” White said. “Clifford and I were such good pals. He was a great guy, and if something happened to me, I know he would come to my club.”

Later Tuesday, a photograph of Antone rested in his usual seat at the Broken Spoke as Alvin Crow and his band played “Rainin’ in My Heart.”

“I feel like the heart of Austin music has been ripped out,” said drummer Chris Layton, echoing the sentiments of many stunned mourners.

Antone was like the music scene’s maitre d’, greeting friends and strangers warmly, always ready to help in any way he could. He was known for paying acts more than they took in at the door, dipping into his own wallet to help both aging bluesmen and young, broke enthusiasts who moved to Austin from all over the world because they had heard that the world’s greatest blues club was here.

One by one, Antone’s heroes passed away — Muddy Waters, John Lee Hooker, Albert Collins, Jimmy Reed, Clarence “Gatemouth” Brown — but not before they played the club Antone opened as a 25-year-old in 1975 on Sixth Street, back before Sixth Street was known as an entertainment district.

At that first of four locations, he’d often book them for a week at a time so the original electric blues cats wouldn’t have to travel between gigs. Every night, Antone would stand at the side of the stage with a broad smile. His gushy introductions were almost as legendary as his club.

While much of the Austin population became aware of Antone mainly through two high-profile marijuana busts — in 1984 and 1997 — for which he served two stints in federal prison, those who knew him personally describe a warm, big-hearted blues encyclopedia who truly did it all for the music more than the money.

“He loved to book the big names, but he also liked to turn folks on to the great sidemen,” said Connie Hancock of the Texana Dames. Eddie Taylor, Wayne Bennett, Hubert Sumlin, Matt “Guitar” Murphy and Luther Tucker may have been better known for backing others, but at Antone’s they were superstars.

“Playing at Antone’s for the first time was an incredible thrill,” said guitarist Eve Monsees, who was called up to join a blues jam when she was just 15. “Clifford had never heard me play, but when he asked me who I liked and I said ‘Magic Sam’ he figured I’d be OK.”

“He was a giant,” said blues musician Jon Blondell. “He lived for the music, and if you were a musician, that meant he existed for you.”

He backed his affinity with an unmatched knowledge of the blues and taught a class on the subject at the University of Texas for the past two years.

“How many other teachers at the University of Texas got their name in the title of the course?” said Kevin Mooney, the music professor who organized “Blues According to Clifford Antone.” “He adored the students and loved giving back to them. He didn’t want that class to end every day; there was so much material he wanted to share with them.”

If you liked the music of Lightnin’ Slim, Snooky Pryor or Sunnyland Slim, you had a good friend in Antone, the cherubic Lebanese American with the askew hair, who grew up in Port Arthur and came to love the blues when he traced the roots of acts such as Cream and Fleetwood Mac.

Yet Antone was known as much for promoting the future of music as for tracing its past.

“I used to come down from Kansas City to go to Antone’s before I moved here,” said musician Guy Forsyth, a mainstay on the club’s stage in recent years. “It was about the third time I was there that Clifford came over and introduced himself. He could see I was digging the music and made me feel at home, a feeling Antone’s had had ever since.”

Antone didn’t just befriend and hire younger musicians; he took them under his wing.

“When me and my family moved to town in 1980, Clifford completely opened up all his resources to help us,” said Hancock.

“When Clifford came out of prison the second time (in 2003), he told me it was harder than the first time,” Hancock said. “The pain was deeper, but he also seemed to want to help as many people as possible after he got out.”

Antone organized a Hurricane Katrina benefit at the Erwin Center in September, starring Willie Nelson and the Neville Brothers. He has also helped surviving bluesmen like 92-year-old Pinetop Perkins move to Austin, arranging for nursing care and an apartment. “I don’t know what I’m gonna do now. I may stay here; I may not,” Perkins said Tuesday before playing hymns in Antone’s honor in his South Austin apartment.

Antone was 18 when he moved to Austin in 1968 to attend the University of Texas, with plans to become a lawyer. That year, he was arrested for trying to smuggle a bag of marijuana across the border at Laredo. The case was dismissed, but Antone dropped out of school and discovered a new passion. “When I finally heard the Chicago blues, man, it was like I finally discovered what had been in my mind my whole life,” he told the American-Statesman in 1997.

After the first Antone’s closed, the club moved far north, but it soon found a new home on Guadalupe Street near the UT campus. Antone said that “between ’75 and ’85, I don’t think there’s any question we were the best blues club in the world.”

But Antone had to relinquish ownership of the third — and some might say best — Antone’s at 2915 Guadalupe St. in 1984 when he was convicted of possessing more than 1,000 pounds of marijuana and served 14 months of a five-year sentence in federal prison.

When he was released, he remained active in the booking of the club, introducing the acts and occasionally sitting in on bass guitar.

The club is currently owned by a board of directors headed by sister — and primary family survivor — Susan Antone.

Clifford Antone’s troubles worsened in 1996 as federal agents investigated a drug ring responsible for smuggling more than 5 tons of marijuana from Mexico to the United States and Canada. Antone’s name appeared in the ledger of an El Paso drug dealer, who used the book to keep track of his suppliers and buyers, court documents show.

Agents then raided Antone’s Town Lake condo and seized $60,000 in cash, a 50-pound scale, shredded papers, 2 ounces of marijuana and a vial of cocaine.

A federal grand jury indicted Antone in 1997 on charges of conspiracy to deliver marijuana and money laundering. Facing a possible life sentence, Antone cooperated with prosecutors and pleaded guilty in 1999.

In December 2002, he was released to a halfway house in Austin, serving out the final six months of his four-year sentence.

In the hearts of local fans, Antone’s musical accomplishments far overshadow his criminal record. He has helped make Austin what it is today: a live music mecca where the young learn from the old and those who move on continue to live in what they’ve left behind.

Singer Delbert McClinton summed up Antone in a statement he released Tuesday. “He loved the music so much,” McClinton recalled. “Like nobody else I’ve ever known.”