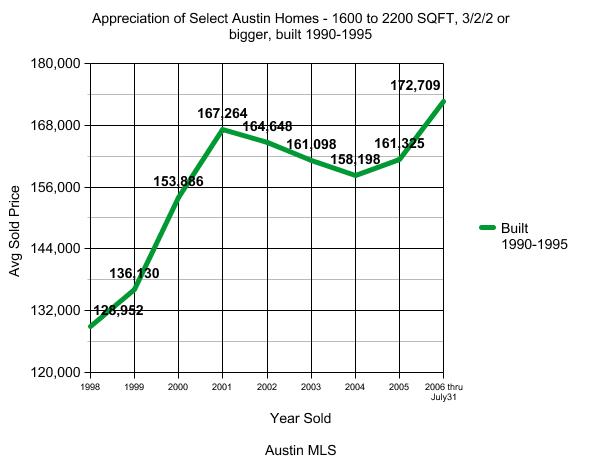 We’ve heard and read a lot about Austin’s hot real estate market lately. Usually we see a broad overview presented in a news story or article showing number of sales, average and median prices, days on market, etc. Lately, this has all been good news for sellers and owners, as median and average home prices are moving up in the Austin area.

The problem, however, with looking at all-inclusive stats for the overall real estate market in Austin is that it doesn’t truly represent the appreciation for existing homes over time, and it doesn’t distinguish between the different submarkets that the Austin MLS represents.

If you are purchasing a home in Austin today, and plan on living in it or holding it as investment for 5 or 10 years, you’ll be selling what will then be considered an “older home”. By “older”, I mean it won’t be less than 5 years old, which is what most of our buyers consider to be a “newer home”.

I took a look at typical homes that sell in the Austin area – homes in a specific age and size range – to see what the appreciation has been on these over the past 7+ years. I selected homes that are 1600 to 2200 square feet in size, at least a 3 bedroom, 2 bath with a 2 car garage, and built from 1990 to 1995. This represents a true “bread and butter” home in Austin, and removes new homes from the equation. Let’s see what the numbers say about appreciation for these existing homes. Here is a breakdown of appreciation for each year.

We’re barely halfway thru 2006, so I expect the 7.1% for 2006 will be even higher by year’s end. This is for all areas served by the Austin MLS though. Does the city of Austin have results that differ much from the full MLS stats, and are those numbers much different than what we would find in an outlying area such as Round Rock? Absolutely.

Let’s look at the same graph below (with the upper range extended to $200K), with Austin and Round Rock broken out. (sorry some of the numbers on the chart overlap) What does graph this tell us? It looks to me like sticking closer to Austin pays off. I preach this constantly, and don’t yet see any reason to stop doing so. Investors ask me about Round Rock all the time. “Isn’t that where a lot of growth is happening?“, ” Isn’t that where all the High Tech companies, and Dell are located?“. “Aren’t many of the new Toll Roads up North?“. Yes, yes and yes. But even during the high flying tech boom, Round Rock still did not outperform Austin in real estate appreciation (save for 1 lone year). Let’s look at the chart below.

The bottom line is that a home buyer or investor who was willing to spend $133K in 1998 in Austin vs. $118K in Round Rock owns a home today that is worth $195K in Austin vs. $144K in Round Rock. Which home would you rather own if you are selling this year? Was the “better deal” in Round Rock in 1998 a good move? And this doesn’t even factor in the better rents that Austin enjoyed during that time span, and will continue to enjoy in the future, nor the lower property taxes inside Austin compared to Round Rock (2.75% vs. 3.25%).

I think an investor in 2006 who is willing to spend $195K in Austin vs. $144K in Round Rock today will reap a similarly favorable gap in appreciation 7 years from now. This is how we advise our buyers and we’re sticking with it.

The problem with Round Rock and other areas surrounding Austin is that there will always be nicer, newer homes available another 10 minutes out. We see that happening in Hutto, Manor, Pflugerville and Elgin now. Stick to areas where new home competition cannot hurt you and you’ll be a step ahead of other buyers and investors when it’s time to sell and cash out some day.