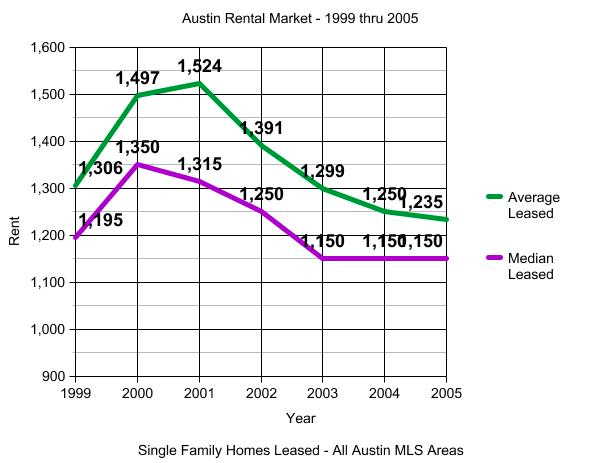 Average rental rates for single family homes in Austin increased 6.6% from August 2005. The increase was 4.2% for July, but as of mid-year 2006 (June), the overall rental rates were down 1% from the same year to date period of 2005. So we have a two month upward trend that we need to keep an eye on. If Austin ends the year with an overall increase in rental rates, it will be the first time it’s happened since 2001. Each year since 2001, rental rates have fallen from the year before, though the rate of decrease has been getting smaller.

We are still seeing very strong absorption of new supply. Investors are keeping the market supplied with plenty of rental homes, but demand is keeping up. 41% more homes have leased through the Austin MLS through August 2006 than did through August 2005. I say this in every rental market update, but when something happens to curb investor activity, we will see rents start to increase again. That may have started happening as prices have risen nicely in the past year while rental rates have pretty much stayed flat overall. This makes the ratios harder to accept for new investors, but we still have plenty of investors buying single family homes in Austin.

Below is a Year-to-Date summary through August 2006 compared to the same period 2005. Notice that except for number of homes leased and the Days on Market, the numbers are mostly unchanged. So even though July and August are showing rental rate gains, the first part of the year lagged, bringing down the averages overall.


Below are the August Leasing stats broken down by MLS Area. In previous months, I’ve broken down stats into broader geographic areas (combined MLS areas and/or Cities) because, on a monthly bases, the sample sizes in many particular areas are too small to be valuable. But that was resulting in some overlap. For example, “Austin” includes parts of Hays County, so stats for “Austin” might have duplicate properties from area “HD” as the northeast portion of HD has an Austin mailing address. There is not a perfect way to segment the areas, so this month I’m sticking strictly to just the MLS areas alone and I’m running the number year-to-date instead of just one month. An MLS Map is included below to you see where all the areas are.

If you’re not completely familiar with Austin, dowtown is located at the lower part of Area 4 and the lower (Southeast) portion of Area 1B.

Finally, below is a graph showing historic rental averages for Austin. It shows clearly the steep fall in rental rates that started in 2002 and is approaching a bottoming out this year or next.