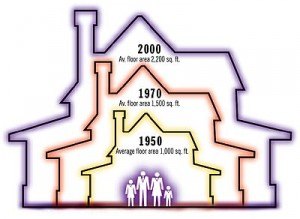 Here is an interesting news article I just read. Our bigger homes don’t make us happier. As someone living in a home that I now believe is too big, I have to agree with the article. Larger homes are harder to keep clean and the extra space attracts clutter and more stuff. Our next home will definately be smaller.

From 1975 to 2005, the average size of new single-family homes grew 48 percent, according to the U.S. Census Bureau’s 2005 survey of new housing. That happened even as the typical household has gotten smaller, falling from 2.94 people in 1975 to 2.6 people in 2004, the latest figure available.

At the same time, the lots that the houses stand on have shrunk about 13 percent.

“Americans generally seem to like to supersize everything, whether it’s houses or cars or TV sets or hamburgers,” says John McIlwain, senior fellow for housing at the Urban Land Institute, a Washington-based research group largely financed by the real estate development industry. “So if you can afford it, more people will buy bigger even if you don’t need it.”

Even condos and cooperatives are bigger. During the past 15 years, the proportion of new multifamily units with two or more bathrooms has doubled, as has the share of units with three or more bedrooms.

But it looks like bigger may not be better. Twenty years ago, nearly six out of 10 home owners reported high satisfaction in their houses. Last year, five out of 10 did.

3 thoughts on “Houses Get Bigger, but Owners Aren’t Happier”