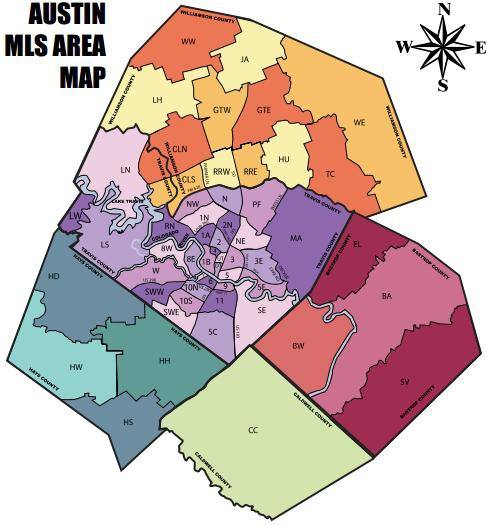 The Austin Board of Realtors announced that changes to the MLS boundaries have been approved. They haven’t officially released the new map, but I talked to an agent on the committee and got a bit of info.

This was the announcement we received:

In response to member input concerning current MLS boundaries, the ABoR Board of Directors recently approved boundary map changes that will save agents time.

??? Hmmm, I wonder what I’ll do with all my extra time? I’m not sure what they mean by this – saving time. Seems like an odd thing to say.

The changes were made to address complaints by MLS participants who identified some areas as challenging to analyze or search.

I rarely even use the MLS Areas when doing real searches for real clients. I use zipcodes, subdivision names, and school names mostly, aside from the other property specific filters such as list price, bedrooms, baths, square feet, etc. The MLS Areas, used alone, are actually pretty useless for pinpointing properties, but are needed for doing broader market analysis and looking at historic trends.

That sounds reasonable. I don’t envy those Realtors on the committee trying to hash this out. It’s not an easy task. No boundary map can be perfect and no matter where the boundaries are drawn, something that someone thinks is an important demarcation is going to get broken apart.

In all, eight new areas were created by dividing existing areas. These divisions will create two areas to better define the downtown region and one area in the western region of Lake Travis — all aimed at helping agents more accurately search and compare properties.

Jeez, we already have about 55 MLS Areas. 8 new ones will put us over 60, I wonder how that compares to other metro areas of 1M to 2M people? There will be a new MLS Area for Central Austin/Downtown, taking the bottom part away from current area 4. Also, Area SW will be split in two (east and west), which is a good idea. I don’t recall the specifics of the other changes. I think Area CL is also being split though – which it needs to be because it’s huge.

More details regarding the boundary updates will be available this fall. New maps will be presented at Realty Round Up on October 17. First American MLS Solutions, our MLS vendor, is working to have the new areas incorporated in the MLS system by late October or early November.

Well, so much for prior stat reports matching up with new ones. I’m not sure how this will pan out for those of us who like to track our own stats, but I think overall we are going to have MLS Areas that make more sense to the public, even if it won’t really change how most of us actually search for properties in the MLS system.

1 thought on “Austin MLS Areas to be Tweeked”