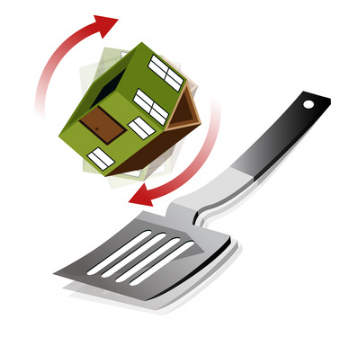 Here is an interesting article on flipping real estate and how the soft market (in areas other than Austin) is affecting those who practice that particular form of real estate investing. The website referenced in the article doesn’t have stats for Austin, but even in our rising market of the past year, one has to be very careful buying homes with the intention of selling quickly for a profiit.

Investing in real estate looked so sexy. Like the tech-stock bubble that turned college kids and housewives into day traders, the real estate boom turned insurance brokers, doctors and bicycle mechanics into real estate flippers, who would buy and then quickly sell homes for easy profits.

Now those profits are shrinking fast. Nearly one in five flippers who sold from April to June actually lost money on the deal, the highest level in 2½ years, according to HomeSmartReports.com, which today will release a report on flipping activity in 147 metro areas.

The vanishing act of speculators is accelerating the decline in home sales this year. That’s making life hard for home sellers but giving buyers a bonanza of choices. It’s also a stark reminder of the cyclical nature of real estate.

Though it’s too early to say how far the market will fall, short-term real estate investors are learning how hard it is to make money – any money – once For Sale signs begin hanging in yards for months. Sellers cut prices, and builders hand out swimming pools to entice hesitant buyers.

Take Jeffrey Epstein, an insurance broker in Florida. When Epstein put deposits down on a condo and a town house under construction in Miami in 2004, he never actually planned to live in them – or even buy them outright.

“My strategy was just to put down a deposit and try to flip the contracts when they built the properties, which I was able to do on a couple others,” says Epstein, 49. “But then I ran into a couple of problems.”

Namely, a local real estate market with a 17-month supply of condos for sale and prices 11% below last year’s median. In June and July, Epstein had to come up with the money to close on the condo and the town house. Now, to get them off his hands, he’s offering to pay the buyers’ closing costs and homeowner’s association fees for a year.

“I’ll have a small profit … but less than I thought,” says Epstein, who’s through with real estate investing.

Thousands of real estate investors across the country are saying the same thing. Investors bought about one out of every four homes sold last year, according to the National Association of Realtors. They focused on the hottest markets, such as California, Florida, Arizona and Nevada – the very markets that are now feeling the sharpest reversals of fortune.

“We’re nervous about what’s going on in the market,” says David Kloth, a doctor in Danbury, Conn., who started a real estate development firm with a lawyer a few years ago in hopes of one day changing jobs. They put down deposits on three luxury condos in Las Vegas that will be completed in November. Their hope is to flip them for a profit of 25% to 30%.

“We’ve got two months to close” on the property, says Kloth, 44. “Until we sell, who knows? I don’t think we’ll lose money, but we won’t make as much as we thought.”

The sharp drop in sales suggests that real estate speculators have fled the market, says Edward Leamer, director of the UCLA Anderson Forecast, a national economic prognosticator. Yet the fact that prices remain stubbornly high in most markets shows that many investors are still holding onto their properties with dreams of making a profit.

“It’s different from the stock markets,” Leamer says. “When things get bad, there’s a mad dash for the door, and prices can drop rapidly.

“In the home market, the investors, rather than rushing for the door, are holding onto homes imagining the market will turn around.”

It reminds him of the last real estate bust in California. “In the late ’80s, here in California, you couldn’t go to a cocktail party without somebody admiring their own intelligence about the latest home they just bought,” he recalls. Then, in the ’90s, deep layoffs in the aerospace and defense industries sent the market into a tailspin.

“What happened in California is a good lesson” for investors. Leamer says. “We had speculators out of the market for at least a decade.”

Flippers make money, but profits shrinking
Some investors are already bailing out. The number of homes for sale in the USA has hit a record. That bulging inventory both makes it hard for homeowners to sell and creates eye-catching bargains for buyers.

In Las Vegas, for example, the market was infested with real estate flippers during the recent real estate heyday. Roughly one out of every 10 homes sold there over the past five years was owned for just nine months or less, according to HomeSmartReports.com.

Now, in new neighborhoods in the Summerlin area of Las Vegas, about 40% of the single-family homes for sale are vacant, says Bruce Hiatt, owner of Luxury Realty Group. “It’s higher than we expected,” he says.

“It’s shocking to see, in a year’s time, the price’s ability to come down,” Hiatt says.

Falling prices have also hurt the traditional buyers who bought their homes with plans to live there and build equity the old-fashioned way. The sliding prices have made life miserable, too, for developers who are trying to sell the last homes in a project. To compete with investors on price, more builders have resorted to offers of free kitchen upgrades, landscaping, swimming pools and the like.

Despite the cut-throat competition, flippers remain active in Las Vegas. About 6% of the homes sold in the gambling mecca from April to June had been owned for nine months or less. That put Las Vegas in seventh place for flipping activity in the second quarter.

Nationally, the level of real estate flipping declined to 4.7% in the quarter, down from a high of 6.4% in the first quarter of 2005.

Those estimates would be even higher, but they include only homes owned for nine months or less. In reality, many investors buy during the construction phase (when developers offer the best deals to generate a buzz) and wait a year or two for the project to be completed before selling.

In the second quarter, flippers who lost money lost a median sum of about $39,000, according to the study. Gainers, on the other hand, made a median of $42,500 – illustrating that it’s still possible for quick-turn investors to make money in soggy real estate markets.

Other highlights from the second quarter:

• In Truckee, Calif., about 15 miles north of Lake Tahoe, 67% of flippers lost money on their sales, the largest percentage of any metro area. Last winter’s snowfall was nearly 40 feet, which may have caused some investors to think twice about the market.

• Flippers in Gainesville, Fla., lost the most money, a median of $63,948. Florida had three of the top four biggest median losers in the country. Gainesville, situated in the north-central part of the state, holds less appeal for investors than do coastal cities in Florida.

• Flippers in Napa Valley, Calif., made the most money: $85,400. The fact that Napa is a small area and a premier wine destination helps explain the big gains.

Since the beginning of 2000, far more flippers have made money than lost money. But even in a frenzied market, amid bidding wars and escalation clauses in contracts, it’s easy for some people to lose money – a lot of money – by flipping real estate.

“In all but four of the last 23 quarters, the flippers who lost money lost a greater amount than the flippers who made money,” says Mike Ela, president of HomeSmartReports.com, which studies flipping trends and other factors to evaluate the stability of local real estate markets.

“We’re bombarded with ‘Get Rich Through Real Estate’ ads and infomercials that promise get-rich-quick opportunities,” Ela says. “So much work needs to go into proper research to buy and sell.”

Part of the art of investing in real estate is being able to ride the cycles. One way of making a big return on your money is to put down as little cash as possible. But then, should you have to hang on to your property through a downturn, you might have to watch your monthly mortgage drain away your profit.

“Buy the best location and have holding power, and you’ll never lose,” says Seth Okun, 50, a podiatrist in Tampa who has investment properties in Florida, New York and Nevada.

Sweat-equity can pay off

One of the most reliable ways to make money in real estate has been to add value to a property. Put some sweat-equity into the property by remodeling or repairing the home or landscape.

He looks for homes that need work or have moisture problems. “I look for mold,” he says. “That’s my best friend. It will drop the price.”

Musgrove puts the savings toward remodeling the bathroom, kitchen and yard but spends “no more than $40,000” on each property. He favors properties with tenants and rents that will cover the mortgage.

But Musgrove is done flipping in San Diego, where home prices are now falling and there’s nearly a nine-month supply of single-family homes for sale.

“I don’t trust the California market anymore,” he says.