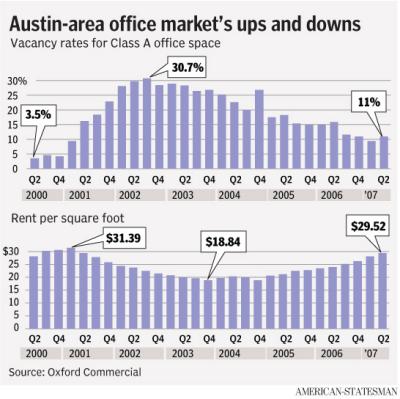 The Austin commercial real estate market is back to where it was before our downturn began in 2001 according the the Austin Statesman article below.

Why is commercial real estate important to residential home owners and investors? Because the commercial market is a strong indicator of the residential market. Office space fills up because of job growth, and those workers need a place to live.

Our Austin residential Rental Market is almost back to where is was in 2001, but not quite.

The Austin-area office market continued its healthy run in the second quarter, with rents for top-tier space hitting their highest level since early 2001, according to Oxford Commercial. And though vacancies for first-class space rose from the previous quarter, when they reached their lowest level in six years, they were still down from the same year-ago quarter.

The market continues to get a lift from a “strong national economics, robust local hiring and our region’s increasing draw as a sought-after location for national and international firms,” said Brett Arabie, a senior vice president with Oxford Commercial, which tracks the market.

Rents for all types of office space continued ticking up, as they had been since early 2005, hitting an average of $24.68 a square foot in the second quarter.

The overall vacancy rate stood at 13.6 percent, up from 11.8 percent in the previous quarter but still down from 17.4 percent in mid-2006. The vacancy rate increase was the first after three consecutive quarterly declines. Arabie said the increase was a result of several projects that opened in the second quarter that were not fully leased.

Central Texas’ strong job growth, which was at a 4.1 percent annual rate in May, continues to fuel demand for office space in a tightening market where several new projects are under construction. Those projects will add more than 1.3 million square feet of space this year.

Regional economic development officials are working with more than 100 companies that are scouting Central Texas for possible expansion or relocation. Those companies include several that could bring between 500 and 1,000 employees, said Dave Porter, senior vice president of economic development for the Greater Austin Chamber of Commerce. A number of the companies looking to expand are seeking 15,000 to 50,000 square feet of Class A space, he said.

“There’s a lot going on in the technology world, a lot of consolidations and, fortunately, Austin is on a short list for many of these projects,” Porter said in a recent interview. “A lot are fairly large,” he said, adding that no decisions are imminent.

Porter’s comments came as Internet search leader Google Inc. said in separate postings that it was seeking software engineers and an engineering director in Austin to lead 100 engineers.

“We’re seeing a big increase in clean-energy type of companies,” Porter said. Digital media, gaming and financial services also are among the type of companies adding jobs in the region, he said.

Porter said California continues to be one of the best sources for corporate relocations, as employers seek to reduce costs.

1 thought on “Austin office market continues to be robust”