Rents continue increasing overall in Austin, as the number of homes rented drops. The average leased price of a home in Austin for June 2007 is $1364 per month, up 7.5% from $1269 in June of 2006. Average days-on-market for homes rented in June 2007 was 41 days. The median days on market was 28 days, which means half of all homes listed in the Austin MLS for rent were leased in less than 28 days. We are clearly moving back into a solid Landlord’s market.

Year-to-Date, average 2007 rents in Austin are up 6.5% from the same 6 month Jan-Jun period of 2006 last year. The YTD average leased price is $1309 per month, up from $1229 last year. We must be mindful however that summer rental activity is stronger, thus as we move through July and August and into the slower Fall/Winter month, the YTD average may drop some. But things are certainly looking good for landlords and property managers in Austin.


Below is a breakout by selected cities. You can see that Austin proper enjoys stronger rental stats overall than any of the surrounding metro areas. I continue to believe that the best place to purchase a rental home is in Austin rather than the suburbs, though some of the outer areas are no doubt gather momentum as new toll roads and freeways shorten the commute times.

Below is a breakdown of leased prices by MLS area. As usual, be mindful that smaller sample sizes can skew things. For example, I promise you rents have not fallen in area 7 in Central/South Austin as indicated below. Only 6 homes have leased through the MLS in area 7 this year and they all happen to be very small homes with lower rents. If you’re not familiar with the MLS areas, check the map at the bottom of this post.

Below is a graphical representation of Austin’s rental market history from 1999 to June 2007. It’s alot easier to understand the huge dip we took in rental prices by seeing it visually. Also, our recovery appears to be in full swing also, but I’m still not certain our average rental rates at the end of 2007 will beat the 1999 number. We’ll see. 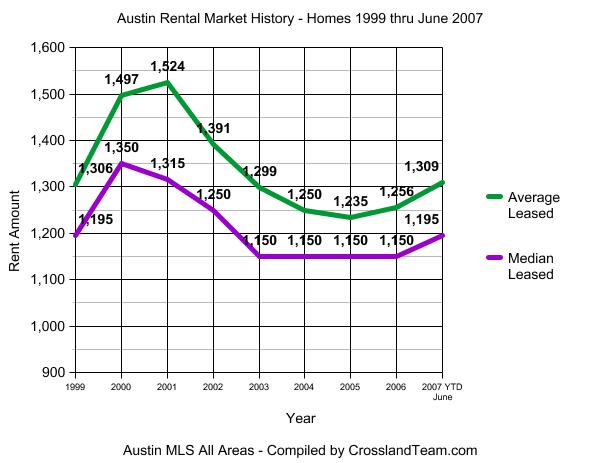 Below is Austin’s current MLS map. 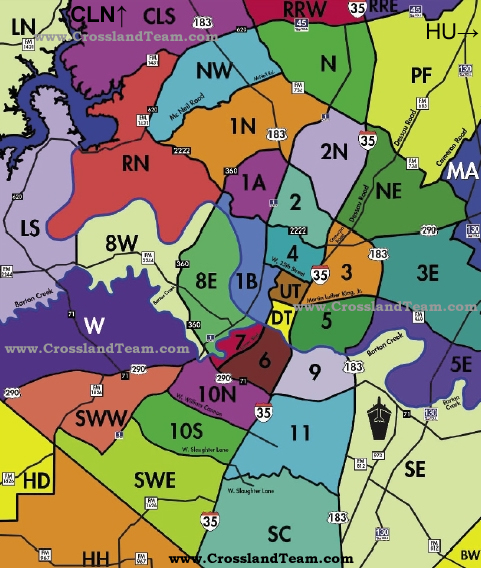 I’d rather see the above graph (rental history) in price per square foot as it seems that the rental homes are just getting larger in size instead of prices going up for the same rental house. Just a thought – nate

I’d rather see the above graph (rental history) in price per square foot as it seems that the rental homes are just getting larger in size instead of prices going up for the same rental house. Just a thought – nate

square footage prices are listed in the other charts.
Steve

Right – I see that but the graph is misleading. What I am saying is its costs less to rent the same house in June 2007 then it did in june 2006, 1.4% less according to the chart above.

Its misleading to say rent is up, when it is just larger homes being rented.

Rent for the same home has gone down in Austin, not up like the cart implies, when compared to this month last year. Not surprising considering the amazing afford ability of this community.
nate

It’s not misleading. Average rent prices are up overall. It’s the trend and direction of overall movement that’s important to observe. Homes in better areas do not rent for less than a year ago, I’ll promise you that. Further out suburbs where bigger, cheaper homes are being built pull down the overall stats.