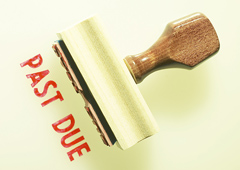 The brilliance of our Texas Legislature is on display again as a new law, HB 3101 which will go into effect Jan 2008, has been passed that will produce greater late fee income for landlords by ensuring that more renters pay their rent late. Undoubtedly, this is not the outcome hoped for by State Representative Rafael Anchia from Dallas, who boasted in this press release of his “ground-breaking tenant rights bill”, but in fact, the outcome will be more tenants paying more late fees. Of that I am sure.

The bill imposes a mandatory grace period for the payment of rents in Texas such that a landlord may not charge a late fee to a tenant unless the rent is more than two days late. This is in fact supported by the Texas Apartment Association as well as tenant rights groups, so what the heck am I talking about when I say it will result in tenants paying more late fee? Will it not benefit tenants to have a couple of extra days to get the rents paid? No, it won’t.

A grace period causes tenants to pay rent with less diligence than when no grace period exists. In other words, without a grace period, more renters will pay on time on the 1st and avoid late fees. With the grace period, tenants get confused about the actual due date because it’s a fuzzy date instead of the clear, hard line in the sand that the 1st represents. Let me further explain how I came to discover this.

Late fee income to my management company remained fairly constant over the years at between 8% to 12% of gross management fee income. In other words, for every $1,000 per month of management fee income, late fee income from tenants would add an additional $80 to $120 per month. This represented a significant additional annual revenue stream, but also generated a lot of extra work chasing tenants down and collecting late rents. In fact, contrary to what some may think, most good property managers would gladly trade every penny of late fee income in exchange for having 100% of rents collected on the 1st and never having to file an eviction. In other words, that late fee income is worth less than the time and effort required to earn it.

Then in the year 2002 at a NARPM Convention (National Association of Residential Property Managers), I was visiting with another property manager about how we deal with slow paying tenants and he told me that his late payments had decreased significantly ever since he did away altogether with the grace period. He told me that all his leases required payment on the 1st, with late fees starting on the second – no grace period – and that he has way fewer late payments than before.

“That doesn’t make sense” I told him. “I know”, he said. “But we have way fewer problems with late payments ever since we eliminated the grace period”. He explained further his theory that the grace period actually confuses tenants, who, as I already knew, substituted in their minds the “late date” of the 4th for the “due date” of the 1st. In other words, the grace period was mentally erased by tenants, and therefore created no benefit at all since tenants simply thought of the “late fee date” as the actual due date.

We discussed this further, and I decided to make this my new policy.

I started in October 2002 writing all leases and lease renewals with no grace period for late payments. It took a year to cycle every lease renewal into the new policy but, as my friend told me would happen, the result was a huge decline in the number of late payments. My late fee income dropped from 8% to 12% of monthly management fees to 5% to 8% of management fees each month. Gone were the arguments with tenants about how to add 2 days to the 1st, that weekends are in fact real days, that holidays are real days too, etc. It always amazed me that some tenants actually thought the grace period started on the “late fee date” that the grace period created, and would argue about it. Oh how much easier it became to have quick, short late payment discussions once the grace period was gone. This was a win/win for tenants and me.

So, it in fact worked out to be true that, given a strict “rent is due on the 1st, period” requirement to pay rent on time, more tenants did in fact pay rent on time and therefore paid less in late fees.

The new law will now force all landlords and property managers who know of the magic of “no grace period” to start writing a 2 day grace period into all leases and renewals, effective Jan 1, 2008. Tenants who rent from those landlords and property managers will in 2008 pay a higher amount in late fees than they collectively did in 2007. I’m certain of it. And they have our Texas Legislature and their tenant advocates to thank for it.

The bill does have some other important changes in Texas Landlord-Tenant law that I’ll cover in a future blog article summarizing those changes.

It will be interesting to watch the outcome of this in the crossland microcosm of the market. Please give us updates in 08 to see how it’s all coming out.

I want to thank you for writing this.

I printed what you blogged about to show to someone.

I want them to understand what kind of racket is created with the grace period.

I always pretended the grace period did not exist and paid ahead of time and have the spotless rental history I have today.

That shows any future landlord, beyond a shadow of a doubt, that rent comes first in my mind.

If one goes by the grace period and waits to pay rent, they not only pay more, they also get a bad rental history and may not find it easy to rent a place in Austin, Texas.

Bad rental history and bad credit has put a lot of people on the street.

In the paragraphs of the typical lease, no where does it tell people that if they are late in paying that it also gives them a bad rental history.

I’ve never offered a grace period until now…rent’s late after 9:00 p.m. the 1st. Thank you for writing about this new law…first I’ve heard of it!
However, I will keep doing a technique I learned from a very experienced landlord…the day after the rent is due (i.e., the 2nd of the month), I present a “Pay or Quit” notice…the first step in an eviction process. This gives me the fastest possible eviction should it prove necessary (hopefully not) and gets the tenant’s attention as well. So with the new law, my tenants will be served with notice to pay or leave before they even incur a late fee! Wonder how long it will be until some legislative genius mandates a waiting period for a “Pay or Quit” notice 😛 ?

A “pay or quit” won’t actually hold up in JP Court. In Texas, a notice to vacate must be unconditional unless you’ve sent a prior demand for payment.

I always send a late notice on the 4th, even with no grace period, and an eviction notice by the 8th or 10th. It’s rare that an evistion cannot be accomplished before the end of a month on that timeline. But I haven’t had to perform an eviction in several years.

I disagree with this. I have been the victim of a shady landlord before who created damage in my apartment after I moved out to keep a $1500 deposit. In addition, he would only accept rent payments on the 1st before 5pm in person. Those of us who worked till 5 were screwed. No matter if we were 5 minutes late and he was still in the office, we were charged late fee’s.

As honorable as some, or most, may be, there are still criminals who get their hands on money and find legal ways to rip people off.

May apartment complex has billed me a $40 late fee for paying my rent on March 2, which was a Sunday. Do you have a reference link for the two day grace period statute?

I found a reference to Texas Property Code, Section 92.019 but I can’t find any online documents.

The old late fee policy can remain in place until your pre-Jan07 lease expires and is renewed. At that time, your new lease will have to have the new late fee policy. Some landlords are simply making the rent due “two days before the first”, thus still charging late fees on the 2nd as before.

The Austin Tenant’s Council has free assistance if you feel like your property manager is not treating you in accordance with your lease or the law.

Patrick Freeze - a couple of years ago

Thank you for sharing this information with property owners that have Austin rental properties. Changes in the law like this can really affect the real estate industry and cause a lot of confusion. This is why sometimes employing a property management company can help. With knowledgeable property managers on staff to stay up to date on all landlord-tenant law changes, as well as the experience to enforce such laws with your tenants without the emotional attachment that often comes with owning investment property, a good property management team can protect you and your property. Thanks again for sharing!

Mike Barbanica - a couple of months ago

Thanks for sharing this information for those that own rental property in Austin. I tend to agree that the idea of a grace payment encourages people to take their time with paying rent. After all, Parkinson’s Law is in existence for a reason, saying that the amount of work given will fill the given time. So, if you give people a grace period, they will let it run its course. Unfortunately, new laws like the one passed can create a lot of confusion for tenants and landlords. That’s why hiring a property management company that’s dedicated to staying updated on all rules and regulations is going to be your best bet.