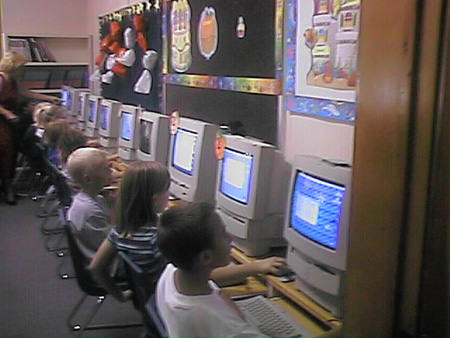 It’s gone too far. The notion that we need to cram computers and technology down the throats of our kids at younger and younger ages has just gone too far. On page 20 of the Aug 10, 2007 issue of the Austin Business Journal is a listing of Austin Private Schools, listing the top 25 private schools in Austin. A sidebar to that list of private schools asks the following question:

“How is your school using technology to enhance the learning experience?”

The answer from the Superintendent of Hyde Park Baptist is the following:

In the early years, children need to remain in their dreamy fairy tale minds, where imagination and creativity are born and nurtured. This is also a time when children learn the basic skills of “playing with” and “getting along” with others, skills very important later in life in collaborative work environments.

Kindergarteners gain no benefit from sitting solo in front of a computer, creating a Power Point presentation. Small kids should instead be on the playground skinning their knees, chasing butterflies, building forts and learning to deal with friends as well as bullies.

I know many think it’s ok to teach kids how to use computers before they read or write, but this sort of educational blunder is already coming back to bite us. Employers increasingly find young new employees to be lacking greatly in critical thinking and creative skills.

This article from Inc.com, titled Younger Employees Lack Basic Skills, points out the problem with the type of education being provided to high school and college kids. Here are a few excerpts.

Among the skills expected to be essential for businesses in the years ahead, nearly three-fourths of employers polled ranked creativity and innovation in the top five.

… Of those with positions to fill, more than 80 percent of small-business owners reported finding few or no qualified applications, with as many as 12 percent citing a lack of qualified employees as their biggest business problem — the highest number in five years, the group said.

…Another 70 percent said recent high school graduates also lacked applied skills, including professionalism, a sense of work ethic, and critical thinking, which more than half described as “very important” for succeeding in the workplace, the study found. Among these skills were personal accountability, effective working habits, punctuality, working with others, and workload management.

It’s hard for a kid to learn the important skills of interpersonal communication and creative problem solving when they’re staring into a glowing screen instead of another person’s face, starting in kindergarten. I honestly think computers interfere with early development more than they help.

For our children, Sylvia and I intentionally picked a private school in Austin that uses no computers through 8th grade. In some ways, that seems like the other end of the extreme, but I don’t think so. They’ve spent almost none of their lives in front of a TV and have never played video games. They’ve spent a lot of time outside playing though. Some of our friends and relatives think it’s weird that our kids have never turned in a type written paper or used computers at school. Everything has been handwritten, in true old fashioned handwriting (which isn’t taught anymore in most public schools), and they’ve been immersed in art and creative efforts alongside academic rigor.

I tell my 14 year old, who this summer I’ve finally allowed to have an email address, that she now has the entire rest of her life to be stuck on the computer and to check email. As she heads into 9th grade at Westlake High School, she’ll now enter a world where technology is everywhere, and she’ll have more than ample exposure to both the pitfalls and benefits of technology and computers. And I tell her I don’t think she’s missed out on anything up until now. She’s pestering me for a cell phone too now, which has also always been denied to great protest. The societal pressure for parents and schools to just dump all of this technology in the laps of our kids is enormous, and I have to admit that it’s very difficult to say “no” sometimes, but I do anyway.

It’s tough, selling this line of thinking to our kids. Sylvia and I work in a home office and they see us on our computers a lot. If I could sell real estate without a computer, cell phone and email, I would, but I can’t. The laptop even has to come along on vacations … if only I could find a good employee to leave in charge …

I tell my kids that technology is a tool to be used after mastering the fundamentals and basics of life and business. It’s not a tool for learning those basics. For example, one should know how to hand write an essay before learning how to type an essay. One should learn how to spell before becoming dependant on a spell checker. One should know how to do math on paper and in one’s head before using a calculator. One should learn how to think and formulate ideas and thoughts before learning how to create a Power Point presentation.

How many kindergartners do you know who possess ideas that can best be presented in Power Point?…

Kindergarten Son : Daddy? I saw that toad out by the rain spout again just now and I was thinking ….
Dad: (interrupts) Son, let me stop you there. Hold that thought and go place it in a Power Point presentation. We’ll set up a meeting with your mother and you can present your thoughts about the toad after dinner.

Yes, call me old fashioned. Call me out of sync with the modern world. Then go ahead and call in an employment ad for your business and see what sort of resumes you receive. Try to hire a smart young person who knows how to think ‘outside the box’, work unsupervised with initiative and interface well with other people. They are out there for sure, but how many will you have to weed through before finding a keeper?

Many younger people, I’ve observed, now seem more comfortable in front of a computer than they do in front of another person. That’s how they’re being raised and educated. They’d rather send an email than pick up the phone. I’ve even received emails from grown-ups who type in the shorthand chat-like drivel of teenage mush heads, using cryptic shortcut words instead of writing in full sentences. (R u going ovr there 2day?). I had a prospective client ask me if we could communicate via instant messenger, and I said “no”. Why the heck would I sit pecking on a keyboard when I know you’re on the other end next to a phone?

Many of our college graduates are “book smart” and “good with computers”, but that doesn’t mean they’ve learned anything useful in school. Is “book smart” good enough to help you grow your business after you hire them? Is “good with computers” enough to keep America great? What great future business pioneer and leader – today’s kindergartner and tomorrow’s Bill Gates or Michael Dell – will later reflect back upon life and attribute her life accomplishments to getting a head start on Power Point at the age of 5? None, I’ll wager.

8 thoughts on “Education and Technology in Austin Schools”