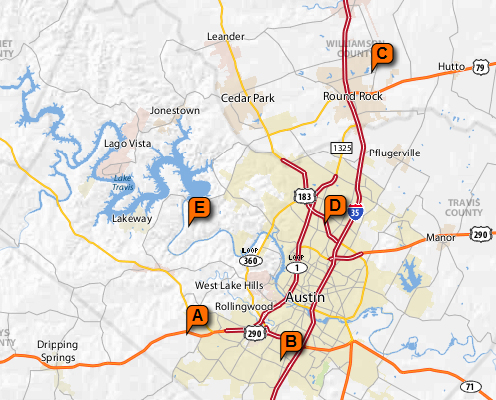 Many people don’t realize how geographically spread out the Austin Metro area is. I’m going to share with you an example of the actual drive Sylvia and I made yesterday while tending to some listings.

Looking at the accompanying map showing the destinations, how long do you think this excursion took and how many miles do you think we drove? At first glance, it doesn’t look that far does it? The total drive was about 120 miles (including a small detour for lunch) and was about 3 hours of pure drive time and about 5 hours total trip time. This was on a Saturday with normal traffic and encountering no accidents.

Many people don’t know this, but the city of Austin is over 300 square miles in size. Check the light yellow shaded areas on the map. That represents our actual city limits. 300 square miles is larger than “bigger” cities such as Atlanta and Boston, in terms of square miles. Accordingly, our city government has a lot more miles of roadway, sewer lines, water lines, etc. to maintain than “larger” cities that have denser population. And we keep expanding. Including the 5-County Austin Metro Area, we are a huge city in terms of driving and getting from one destination to another.

That said, our commute time tolerance is lower in Austin than what I hear from people in California and other places with heavy congestion and longer commutes. In general, Austinites don’t like driving more than 30 minutes to and from work. People we know from the East Coast and California tell us anything under an hour is ok. Personally, I’m in the 30 minute or less crowd, but as you can see, practicing real estate in Austin can make for some long days on the road. I would never have attempted the route shown above starting at 2PM on a weekday.

Likewise, when we have buyers who are not set on which part of Austin they want to live, it’s sometimes hard to explain that we won’t be able to effectively show them the entire area in 1 day. Often, they’ll think we can see South Austin, then go check out Round Rock, then out to Leander or Cedar Park. That would be a long, long day if trying to see a lot of homes in all those areas.

Typically, South Austin alone can take 3 to 5 hours (depending on how fast or slow the buyers are at looking) if we’re going to show 10 or 12 homes, cover many different neighborhoods (some just being drive-through tours) and possibly include a trip out to Belterra and Dripping Springs. 10AM to 3PM is the best time to look, as far as driving goes, and we find that by 3PM people start getting tired anyway and it becomes hard to remember all the homes. Heading up to Round Rock at 3PM after a day in South Austin would be murder.

If you’re planning a house hunting trip to Austin, and you really want to explore all corners of our metro area to decide which areas feel best for you, you should plan on 2 or 3 days (5 hours being a “day”) of touring and driving. Weekends are best for getting around. We often recommend to our buyers that they plan an unstructured day of driving and scouting on their own as well. Finding your way around Austin with a map can help you learn the area better than simply being driven everywhere by a Realtor.

As you consider your next home in Austin and pick an area, know that our traffic, though not terrible by some standards, is going to keep getting worse. Maintaining close proximity to your most frequest destinations (work and play) should always be a top consideration unless you don’t mind spending a lot of time on the road.

7 thoughts on “Driving Around in Austin – How big is Austin?”