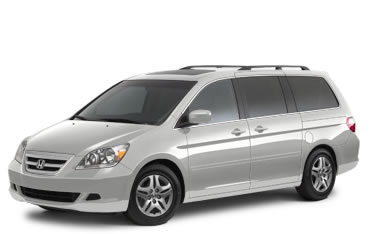 Sylvia was broadsided yesterday in her new (3 months old) honda odyssey by an Illegal Immigrant driver on Manchaca Rd. He had no insurance, no driver’s license, no proof of identification and didn’t speak English. The police came and wrote him three tickets. I’m surprised he wasn’t arrested, since he had no proof of ID. Luckily, the damage is cosmetic and the van is still drivable, but it was unnerving for Sylvia as she was 1 hour late to meet her buyers and was distressed that her nice new van is now damaged.

The funny thing is, the first thing I thought as I looked at the damaged side of the van was “I wonder if that’s going to cost more to fix than what we’re saving on the cost of building our new home?” Then I wondered why I thought about it like that.

The thing is, we all want the best value we can get when buying or building a home. As I make daily visits the jobsite of the home I’m building, most of the people working there do not speak English. I have no idea if they are illegal or not, and I don’t ask. My home is coming along well, the quality of the work is very good and I like the price I’m paying.

If a builder were to say “I can build your home with only English speaking workers and guaranty that only documented workers will set foot on your property, but it will cost $10 or $20 per square foot more”, I’d say “no thanks”. Knowing that, do I have a right to feel angry that an illegal immigrant just ran into my wife?

For all I know, this guy who ran into Sylvia is a skilled tradesman who works on new homes. He may be an excellent tile worker. [Edit: Sylvia tells me now that he is a painter] He’s not personally working on my home, but is representative of many who do. So I can’t simultaneously think “damn that illegal immigrant, sneaking into our county, driving on our roads and running into my wife” and 30 minutes later stand inside my new home and think “I sure do like how my new home is coming along and the great deal I’m getting on the construction costs”. I guess I could say that I wish all the illegals would get a drivers license and buy insurance, but I’m not certain that they can without proper documentation.

This is the paradox of the illegal immigrant debate. To those who say we should round everyone up and send them home, I’d ask “how much extra are you willing to pay for your new home, your lawn care and maid service, or even your meals at your favorite restaurant and your hotel stay?” I don’t condone law breaking, and I don’t want to pay more for these things either, so what’s the answer? Probably the answer is to allow more legal immigration and make the process easier.

Let’s imagine that a builder decided to build a 100% “documented worker” home. A certification could be made ala the “organic” label on food products, or the “green certified” classification on new homes, so that an anti-immigration buyer could feel good about the purchase – the same as an environmentally conscious person feels good about paying more for a “green” home.

If we believe polls that say Americans are angry about illegal immigration, this new product would provide those Americans with a tangible, honest way to truly answer the poll question. Would a person stridently against the influx of Mexican immigrants into Texas, who thinks they should all be rounded up and sent home, be willing to pay more for a “documented worker certified” home? I seriously doubt it.

So at first, I was angry at the guy who ran into Sylvia’s van, and my perception of who and what he represents, then I realized that feeling that way makes me a hypocrite. I can’t have it both ways. One thing affects another.

Last night a woman called, saying she was interpreting for the driver who caused the accident. He called to say he was very sorry and wants to pay for the damage instead of us filing an insurance claim. I’ll have to look further into the implications of dealing with it outside the insurance claim process, but it was good to know that the driver wants to make it right.

Tuesday we’ll get an estimate for the van repair and go from there. Later today I’ll be at my new house, saying “hola” to the workers as I walk through and check things out, and “adios” as I leave.