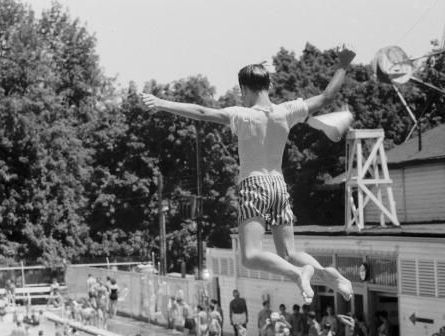 When I was a small boy, 9 years old, my family was traveling on summer vacation and we stopped at a campground that had a huge pool with a high dive. It was 1972. There were a ton of older kids lined up to jump and dive off the high dive into the pool. I had never made such a leap but wanted to try, so I put on my swim trunks and got in line.

After reaching the top of the board, and walking to the end, it looked much higher than it had from the ground. I became scared and didn’t want to do it anymore. I turned to head back down the ladder, but the other kids were lined all the way up the ladder, waiting. The next kid in line, a fat red-cheeked bully-looking type, stood at the top staring me down. He said, matter of fact, “you can’t go back, you have to jump”.

I was paralyzed and frightened. The other kids became impatient and started heckling me. “Hurry up”. “Go!” “Come on, chicken”. I almost started crying. I wanted my Mom. There was no way to get down unless they all backed down the ladder and let me off, which wasn’t going to happen. I had to do what I climbed up there to do. I walked back to the end, and jumped.

The fall down seemed long. I was off balance, arms flailing, legs peddling. I hit the water on my side and felt a painful sting as the water spanked my skin hard. Ouch! Under water seemed other-worldly as I tumbled, disoriented. I realized I was ok, kicked a couple of times, resurfaced, and let out a war-whoop of triumph waving my fist at the other kids, who were now cheering and laughing at my ungraceful plunge. I scurried out of the water, my side burning with pain, and got back in line, hungry to do it again.

I had made the leap. I had survived. And I never felt so ALIVE and full of confidence.

I wasn’t old enough to interpret what that plunge represented at the time, but I now know it was one of many instances in life where we are all called to face our fear, step through, and take a leap. I was learning how to approach life with fear in front of me. I was learning that I can do scary things and come out ok, even if it wasn’t perfect. I was learning to feel absolute terror about doing something, then doing it anyway.

Can you take the plunge into real estate?
For many who make the decision to go into real estate sales, they climb the ladder, but never climb back down nor take the plunge. Instead, they remain in the safe place of doing neither. There is not a crowd of people yelling at them to hurry up and do it, the bills are still being paid by the job, so they remain in limbo, having neither failed nor succeeded at becoming who they want to become.

I was on staff at a men’s training this weekend, the New Warrior Training Adventure, where I met a man who is a Realtor from another city and has been standing in such a place for years. “I do 2 or 3 deals a year” he told me, “for friends and family members, sometimes co-workers”.

“How’s that working for you”, I asked.
He said, “I really want to do real estate full time, but it’s hard to give up the job and take the leap”.
I asked him, “what are you afraid might happen if you quit the job and take the leap?”
He said, “I’m afraid I won’t make enough money to pay the bills”.
“And if you don’t make enough to pay the bills?”
“I’d have to start over.”

So, on the one hand, taking a risk means possibly losing everything and having to start over. On the other hand, playing it safe means never knowing what could have been. Those are tough choices.

He said he’d probably regret not ever trying, which is what most of us will probably say if asked. But then few of us will act on it.

I then offered him one of my favorite quotes, which I heard from an old Navy woman on a documentary about the birth of computers, “a ship in harbor is safe, but ships were meant to sail”.

We have to ask ourselves when standing at these crossroads in life; am I going to sail my ship? Or am I going to sit on the dock, dangling my feet over the water, dreaming, staring at other ships as they disappear over the horizon, but terrified to sail my own because I’m afraid of the unknown?

Remove the Option of Failure
Your best chance of succeeding in real estate full time is to set yourself up so that failure is not an option. Keeping the job is planning for failure. If you plan to fail, you’ll fail, because that’s what you planned for.

I’ve seen it over and over again. Part timers enter the real estate profession and either remain part timers or wash out because part time rarely cuts it in this business. There are exceptions, but the best way to leap a scary divide between salary and commission pay is to get a running start and just do it. It’s hard to get a running start when you have a full time job weighing you down and holding you back. You can’t fully commit yourself dragging that load. If you’re not fully committed to being the best Realtor that your clients will ever know, why do it?

But it’s scary
Yeah, it is. I was scared when I quit my salaried High Tech job as a computer programmer in the 1990’s and decided to try real estate full time (Sylvia and I had been full/part time off and on many years already). I had it good with the salaried job too.

I had a casual workplace where I could wear my shorts, tee-shirts and flip flops, sip Dr Peppers, eat pizza, listen to my tunes, keep my hair the way I like it – long and scruffy, be surrounded by pretty marketing chicks all day, and have great health insurance for my family. All I had to do was crank out my code and meet the deadlines. But the cube scene – doing the corporate thing – that just wasn’t where I felt my spirit wanted to be. I was hiding out, playing it safe. People thought I was crazy when I quit, but they also said “I wish I had the guts to do that”.

The scariest thing about commission sales is, you earn what you’re worth, no more, no less. If you’ve been hiding in a cube, behind a safe paycheck job – living in a Dilbert Cartoon – held back by neurotic bosses and scheming co-workers, you may not know your true potential because nobody has ever invited you to unleash it. But there’s only one way to find out. Take the leap. If you’re good at it, it will happen for you. If you’re not, it won’t. But you can always start over and have some stories to tell.

And don’t underestimate the motivational forces of Fear and Urgency. If you have no consequences of failing (keeping the job), and you’re in no hurry to succeed (bills are being paid), then where will your motivation come from? You have to make it scary and dangerous. You have to have serious motivation. In my case, I had a wife and two small kids. I was not going to let them down. No way.

It is fear and urgency that got me off that high dive and into the water. Without fear of failure, and the urgency of those screaming voices, I would gladly have given up and climbed back down and ran crying to my Mommy, perhaps never to try that particular leap again.

Instead, I discovered a part of myself that has served me well ever since – the Bold Adventurer. It’s the Bold Adventurer who was willing to walk away from a great job with about 6 month’s living expenses in the bank, and set sail. Is there a Bold Adventurer in you? Will your ship set sail, or remain tied at the dock?

If you’re pondering a real estate career, call me or Sylvia any time and we’ll be happy to share what we know and what we’ve experienced as Realtors. It’s not for everybody, but anybody can succeed.

If you’d like more information about the New Warrior Training Adventure, where men find their Bold Adventurer and much more, click the link or call me.