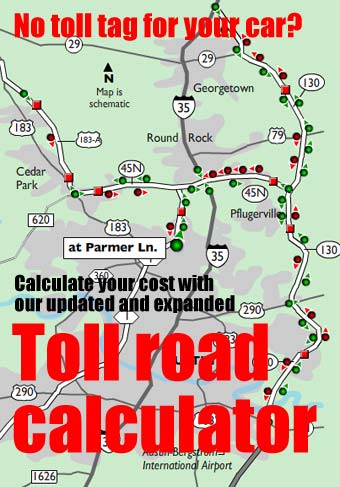 The Austin Statesman website has an Austin Toll Road Calculator that’s interesting. You can click on your entry and exit points on the map to find out the cost of a certain trip. (you may have to log in or register at Statesman.com to be able to use it – sorry)

Every since I paid $2 to drive a couple of miles on Toll Road 130 coming from Hutto shortly after it opened, it occurred to me that the cheap homes in Hutto are not so cheap if you’re a commuter.

For example, using the interactive toll calculator, there are a lot of $3 one-way trips you can create around Austin (I even mapped a $4.50 one-way trip), but let’s just say you live in Hutto and come in on 130 to the Hwy 290 exit and on into downtown. That’s a $2 trip each way.

So, the cheap home in the Austin outskirts is now $180 ($67+$113) per month in additional commuting costs. I haven’t even added in higher water bills, higher property taxes, etc. (compared to Austin) nor have we factored in higher operating costs and depreciation for your vehicle (more frequent oil changes, tires, loss of value due to high miles, etc.) or the additional time away from your family while commuting.

The point is, the cheap housing that draws many buyers to the outskirt areas of Austin can in fact be an illusion once you factor in all of the total costs of living further out. That $180 per month would be better spent building equity in your closer in home that keeps you off of toll roads. Just something to think about before you get all starry-eyed over that big 2800 sqft house in Hutto that only costs $200K, but leaves you with a 30 mile toll road commute each way. Yes, it’s bigger, and newer than the old homes you find closer in for the same price. But are you really, truly calculating the “price” correctly? You have to factor in total cost of ownership, of which commuting costs are a big part.

Plus the extra time it takes to leave in Hutto versus South Austin. Even with toll roads it’ll take, maybe an extra 15-30 minutes each way (I’ve no idea what a rush hour Hutto commute is via tollroads). What is an extra half hour to hour worth to you?

That’s not that much. $180/month is equivalent to about a $28,000 larger mortgage, or an extra $10/square foot. (Only about a third of this is due to tolls). The net cost of the home is still under $100/square foot. Note that the larger the house, the smaller the commuting premium per square foot.

I’m all for the tolls. They encourage suburbanites to sort to minimize commute. If you take two homebuyers with the same income and preferences, a home in Hutto is more valuable for a Dell employee than a downtown Austin employee. Tolls thus encourage more efficient use of land in the suburbs. Still, the toll premium isn’t all that much.

One final point. I suspect that even toll roads raise property values — the extra mobility is worth more than the cost of the tolls. That will be an extra cost for people who moved to Hutto after 130 was built.

$180/mo. = $2,160 per year. I think most people will consider that an amount that matters. But your right about some people thinking it’s not a bad price to pay for a bigger home.

My point was simply that when shopping for homes and comparing prices, the cheaper prices further out have to be adjusted for the additional (hidden) commuting costs and commuting times.

I’m not sure I follow your line of thinking on tolls reducing commutes or raising property values. Noise reduces property values for a lot of the homes near a tollway. I get your point about a Dell employee value a closer location though.

If you live in South Austin for a similar home, you may pay 20% to 30% for similar home. So in property taxes, you’d pay 3% on the $100,000 extra you had to pay for your home = $3000 per year. If decide to live in a smaller home at the same price, you would have less room for your junk and may have to get a storage facility $50 per month = $600 per year. The reduced space would make you watch football in a bar rather than at home because your 56″ TV doesn’t fit. While watching football, you may have two beers and a generally unhealthy meal = $15 per Saturday for UT 13 games = $195, and Sunday for Cowboy’s 16 games including a play off game or two = $270 Total increase for football fans with lots of stuff is $1065. What if you are NBA, or a baseball fan? Big trouble!

Maybe you buy a Prius, or a motorcyle? Maybe one of those solar cars? I am joking around of course, but the fact of the matter is that you should buy where it suits you and your family’s lives best. Georgetown, Hutto, Leander, Round Rock are fine places to live if that’s what floats your boat.

I’m just speculating that SH130 has been good for property values in Hutto. Mobility is worth money, maybe more than enough to offset the toll. I know you don’t work the Hutto area, but I’d be interested in hearing from realtors who do whether they think SH130 has affected property values. (I’ll defer to you, but I can’t imagine that the noise/pollution from the highway affects the value of properties more than a 1/4 mile away.)

Let’s not forget the 10% TxTag discount! Anyone commuting on these toll roads should definitely have one.

I am considering moving to Austin after I retire from the Navy next year. I have lived in San Diego and dealt with their massive traffic problems. From what I have read, the tolls are costly, but if the traffic is not to bad, I would not mind paying a toll to live in a better home. As one writer stated, the housing prices are defiantly bringing people to Austin 🙂

Any suggestions on where we should look to move? My daughter is in the gifted program, and we would want a good school system for her.

It’s important to mention that these aren’t new costs – the difference is that in the past, central Austin paid the cost for people to live out there in the sprawl (urban gas taxes and even property/sales taxes spent largely on suburban commute-ways).

Now, the people creating the cost have to pay (most of it, at least). That’s a huge step forward.

I’d need more info to be able to answer your question. Feel free to contact me or Sylvia directly.
Steve

When dealing with a commute from Hutto or Leander, $4/day is nothing compared to the drive without the toll roads. You easily save 30 minutes each way on the toll roads, that’s $4/hr which is less than minimum wage. I would assert your time is worth more than minimum wage. Also, sitting in traffic for that extra hour could easily burn up a gallon of gas, which costs $4 right now, so it is a wash cost wise, and you get your time back.

I don’t think toll roads belong everywhere, and some of the plans put them in the wrong places (we need to hit I35 south, not I10 east for example). In general however, they serve a purpose. People only drive on the toll road if they need to drive that route, which keeps traffic flowing and cuts down on the number of vehicles in general.

I’m new to the east Austin area, but it appears that there are toll ways where free roads are supposed to be in the first place. Coming from Houston, tolls are for CONVENIENCE; there are many routes to take that don’t have traffic signals. Toll roads in Houston (Hardy Toll, BW8) just make the commute faster, but you can take any FREEWAY (yes, NO traffic signals on FREEWAYS there). Things can be done, for example, US 183 could be part of a semi-loop from Ben White @ HWY 71, to US 183, back to N. I-35, which would free up traffic downtown on I-35. Why not spend the money to develop a couple of overpasses to make this happen instead of trying to make a buck for a road that’s like 10 miles from Austin??? Plus, whenever on 130, I only see a handfull of cars anyway. What a waste.

Thanks for your comments. Yes, there are many issues with the manner in which roads are constructed and paid for in Central Texas. No solutions in sight unless the legislatures gets the courage to raise gasoline taxes, which I think would be a prudent thing to do instead of so mant toll roads.