No matter where you live, there always exists two real estate “markets”. One market consists of homes that are priced “in the market”. These are the homes that will sell. The other market consists of homes priced “out of the market”. These are homes that probably won’t sell unless a price or condition adjustment is made to move the property to the “in” section of the market. It is the combination of pricing and condition that determines whether or not a property is in or out of the market, and thus whether it will sell. The best graphical depiction I’ve seen of the “two market” rule was outlined in a Power Point presentation at the Keller Williams Mega Agent Camp earlier this year in Austin. I’m going to share the graphics and explain this simple but powerful rule.

Take a look at the chart below.

The dark yellow portion in the bottom left corner represents the relative position, based on the competition that the “in the market” listings hold. Homes in the outer light yellow band, are either over-priced, not properly prepared, or both. The vertical left line represents pricing, and the horizontal bottom line represents condition. The closer your listing can be to the bottom left on both price and condition, the better your chance of a quick sale at full price. And, by the way, many listings in Austin are in fact selling very quickly, even while many others are sitting stale on the market for more than 6 months.

Now let’s take a look at what the chart looks like in a Seller’s Market.

Notice that in a Seller’s Market, there is a lot more “in the market” space. In the Seller’s market, even over-priced listings and homes in less than perfect condition sell because demand is so strong. We saw this in Austin from about late 2005 though the middle of 2007. In a Seller’s Market, even lazy Sellers with unskilled agents can get their homes sold. Even the agents we call “pretenders” can make a living while the market is hot.

Nevertheless, the Seller’s market does have limits, as represented by the small outer band of yellow, where homes will not sell even in a hot market.

Now let’s look at a Buyer’s market, such as Austin is, at present, moving through.

Notice that in the Buyer’s Market, the competition becomes serious. Only the homes that are priced well and in top condition will find buyers. Listings out in the big yellow area will expire or be withdrawn if price and/or condition adjustments are not made to move the property into the competitive zone.

The result of the greater number of listings being “out of the market” is also illustrated in the ratio of Sold vs. Not Sold listings each month. The graph below shows this, and an earlier blog article from last month explains the graph in more detail. I haven’t updated the graph to include Oct 2007 Sold vs. Not Sold yet, but a quick peak at the numbers tells me that we are approaching an inverted ratio, that is an overlap situation where more listings expire or are withdrawn than sell. The ones that don’t or won’t sell are all those listings out in the big “out of market” band in the above graph.

Notice in the chart below, how the dark and light green lines are beginning to converge. For October, they will almost come together but won’t cross yet. I expect they will in November or December though, based on the fact that our current absorption simply cannot allow the record number of listings now on the market to sell. For the first time since 2003, we’ll have a situation where more than 50% of the listings in the Austin MLS will fail to sell.

Not surprisingly, as an aside, we’re going to have Austin Realtors falling out of the business in droves. We have over 11,000 Realtors in Austin currently. We only need about 6,000 good ones. The rest are dead wood and they’ll be gone soon, unable to make a living because they don’t have a business model designed to survive dry patches in the market. But that’s another topic we can explore early next year as we learn the Realtor dropout rate (Austin Board of Realtor annual dues is due Dec 15th). Back to our two markets…below is the Sold vs. Not Sold graph. 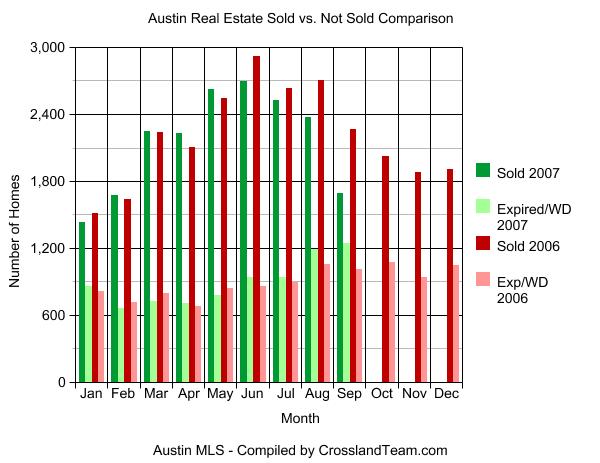 Finally, let’s add a middle band to the in and out graph and see what it looks like when a listing is neither in or out of the market, but instead in “no man’s land”.

The above chart breaks the market into thirds. One third of the Market is in. Those are the listings that are in the top 1/3 with regard to being well priced, and they are also in the top one third in condition. The outer band is just the opposite. But then we have the middle third of listings. These are often listings that are receiving some showings but no offers. Or if they receive offers, they are low offers and the seller is unwilling to budge from his “no man’s land” list price, so they remain unsold.

So what should a listing agent and seller do in Austin’s current market, which has abruptly become a Buyers Market in many areas and price ranges?

First, you have to be clear on where your listing is in relation to your competition. Sold comps and market analysis are less important in a Buyer’s market. We do them, of course, to establish a baseline for the pricing, but further adjustments need to be made depending on the absorption rate, the Active/Pending ratio in the area, and the fierceness of the competition.

The Active competition is what you really need to pay attention to, as those listings determine where the “in or out” line is drawn by the limited number of buyers. This is hardball stuff. Sellers are loath to drop prices, but as we are now seeing with the rising number of failed sales attempts in Austin, Buyer are not biting at the listings that are not priced well. Oddly, average and median prices keep rising even in this market, but that’s because the unsold listings drop out of the stats, leaving only the successful sales efforts to form the sold stats.

1 thought on “A Tale of Two Real Estate Markets”