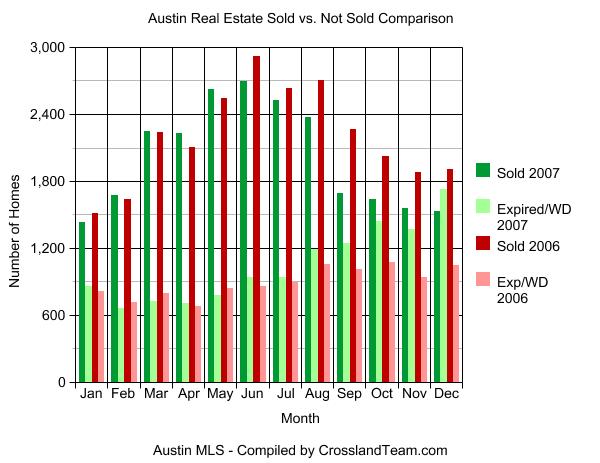 I predicted a few months ago that November 2007 might see an inverted Sold/Not Sold ratio in the Austin real estate market, that being a situation where more of the listings in the Austin MLS fail to sell than do sell.

I was wrong about November but it did happen in December. For December 2007 there were 1531 single family homes sold in Austin. The same month saw 1732 Expired/Withdrawn listings. Notice the dark and light green bars on the chart above and how the light green bar (failed sales listing) jumped ahead of the solds. This is the Tale of Two Markets situation I wrote about in November.

I’m also just about done with the year-end stats for Austin and the numbers once again look real good considering the strong headwind we were up against, what with all the media doom and gloom, and buyers who believe what they see on TV and hold themselves out of the market. Despite that, the average sales price for homes in Austin was up 6.63% in 2007 across all MLS areas. Several of the closer in areas had double digit appreciation in average sold price, median sold price and sold price per square foot. Many had median days on market of less than 30 days, meaning in some parts of Austin, half the homes that sold sold in less than a month. That’s a good real estate market.

But how is it possible for prices to be rising while there are so many unsold homes? Again, it’s two markets. The unsold homes are not reflected in the average sales prices because they didn’t sell. The Expired and Withdrawn listings are invisible to the market stats we run. Those homes may as well have never been put on the market. It’s the homes that in fact do sell that generate the stats we look at.

I’ll have the big chart done by tomorrow hopefully and will post here the End of Year Market Update with breakdowns for all the MLS areas and how they did in 2007 compared to 2006. Stay tuned…