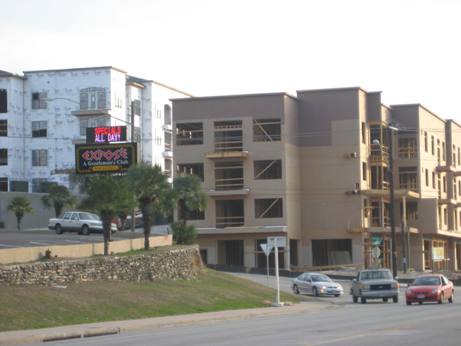 I was driving up S. Congress the other day, checking out the progress on the SoCo Lofts and wondered if the units on the north end, which overlook a strip club and its parking lot, will sell for as much as the others.

The photo you see here is of the north side of SoCo Lofts. In the foreground is Expose “Gentlemen’s” Club sign (building is out of view to the left of the photo).

The north side would normally be desirable as it faces downtown and won’t have direct sunlight beaming into those north facing windows. But what might it be like at 2AM each night when the parking lot come alive with the engine noise, headlights and chatter of boisterous patrons departing the strip club? This is a question that a buyer really needs to consider.

Frankly, if I were looking at a unit and my view was going to be the sign and parking lot of a strip club, I think I’d pass. I’d rather look at the roof of the post office and the freeway from the south side.

And what might the directions to your new place sound like? “Drive South on Congress, turn left at the strip club and right into the first driveway”.

The immediate surroundings of a commercially located residence is something all condo buyers should think about. Not just this specific example, but any condo downtown or in a historically commercial area is going to have some element of potential noise or light pollution, depending on how high up you are and what sort of establishments surround your building. There are a lot of bars, restaurants and nightclubs in downtown Austin. Now that downtown Austin is seeing a growing residential population move into the new high rises, there is bound to be some friction. 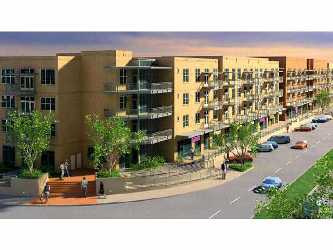 Note in the rendering of what the finished SoCo Lofts will look like. If you panned backward and a little to the left, there you’d have your neighboring establishment it in all its prominence. Of course the developer isn’t going to make this obvious. See the balconies on the north side? (left edge of photo). That’s where you’d do your people-watching. Probably, after buying those places, the new owners will start complaining about the noise and say that the strip club has to go. But it was there first, and it’s a legal establishment.

As for me, with a wife and kids, I don’t think I’d want the visual landscape or noise of a strip club outside my window.

11 thoughts on “Would you live next to a Strip Club?”