For 2007, the Austin Rental Market continued to see gains in average and median rental rates for single family homes. But we still lag behind the rental rates landlords enjoyed 6 and 7 years earlier, if you can believe that. The graph below shows where we were in 1999 through 2007. You can see the huge 4-year plunge rental rates took from 2001 until we started back up in 2006 and 2007.

All said, another good year heading in the right direction for Austin landlords. See the graph below. 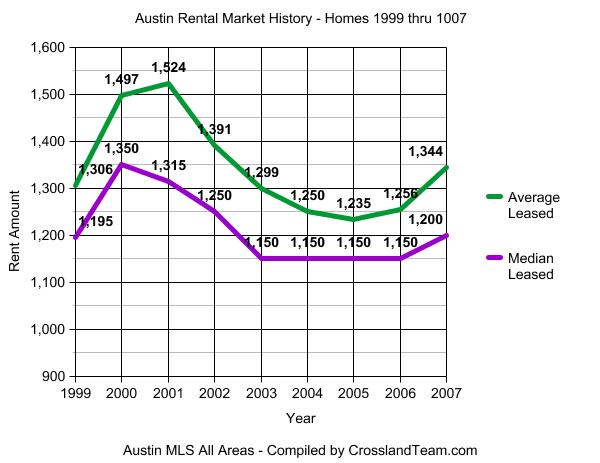 I’m still having a lot of trouble extracting stats from our MLS system following the switch to new MLS software, which is why I’m so behind, and why I don’t have breakdowns by MLS Area. It’s really frustrating not being able to run stats the way I have for the past 2+ years. Especially knowing from my web traffic that the stats are among the most read blog articles. Nevertheless, I’m posting what I have and hoping that the bugs will be ironed out of our MLS software soon. As usual, feel free to post questions or comments about the leasing market.