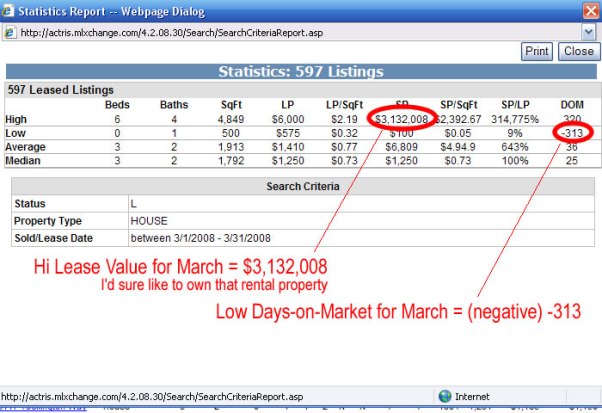 Weeding out the outliers, as shown above, is something that could be accomplished automatically with better software. I’ve asked ABOR more than once, as I email in listings with bad data, why a software script can’t be written and run nightly to flag things such as a home that just “leased” for $3 Million Dollars a month, as shown above. Or a home, as noted above, that sold in -313 days (obvious software calculation error). Or homes that “sold” for $1,800, as I’ve seen when an agent misses a zero or two on entering a closed listing sold price.

That’s human error, but better software combined with a proactive ‘quality data’ effort at our Austin Board of Realtors would disallow preset ranges of values to be entered in the first place. In other words, we know a sales price 100 times lower than a list price can’t be correct, so the software could simply be programmed to disallow it and ask the user to verify the input.

This would eliminate a lot of the over/under value sales prices that get entered, and it’s programming 101 level thinking. It’s no different than writing a software program that would require 5 digits for a zipcode, or 10 digits for a phone number, or the “@” sign when entering an email address. Yet our software, which costs over $1M a year for our Austin MLS members, can’t perform such simple data protection reasoning as not allowing a lease listing to be marked leased at a value of $3,132,008. I feel like I’m being ripped off for the dues I pay.

Assumning bad data will be entered anyway, how hard could it be to run a nightly report that checks for such things and emails the notification alerts to the system administrator for examination and possible correction? For that matter, how long would it take to manually run a search each day for such things as “Leased Price greater than $10,000” or “Sold Price less than $10,000” or “Days on Market less than zero” or “Square footage greater than 10,000 or less than 300”. There are a few agents in Hays County that enter all of their listings with zero square footage. That screws up our price per square foot stats. I can run those searched in 3 minutes. Why isn’t someone at the Austin Board of Realtors assigned this task daily each morning and afternoon? I’ve asked, and all I get is blowoff blather, never a promise or a timeline.

Simple daily data searches like these by ABOR staff would stop these data errors from remaining in our MLS database where they distort and pollute the other data that we use to run Stats, Market Analysis and Area Market Activity Reports.

Instead, Realtors like me, and many others, provide uncompensated beta testing and troubleshooting for an MLS System that, it has now been ackowledged both by ABOR and MLXChange, was nowhere near being ready for rollout. So, we Realtors who use the system must stop what we’re doing, take a closer look when something looks out of whack, then research and locate the listing(s) with the erroneous data, and then email to the Austin Board of Realtors with a note explaining the problem and the correction needed. It’s a rediculous waste of our time, but we have to do it if we want the data cleaned up.

I’ve decided to start writing more regularly about the MarketLinx MLXChange MLS System in the hope that other Realtor Boards around the country might do a bit of due diligence by searching the internet for MLXChange stories. I have to keep my posts fact based, or I can get in trouble. Fact-based is easy to do with screen shots like the one above. If MarketLinx doesn’t want such things shown, they canb fix the software.

There are a lot of other Austin Real Estate Bloggers who have written extensively about MLXChange and its shortcomings. Over 200 Realtors turned out for a town hall style meeting where we were promised that fixes were being given high priority. Not much has changed since then though.

But it’s been 6 months since MLXChange was turned loose on us and they still can’t even deliver the blasted sqft column that was left out of our Leasing CMA report. It was put back into the sales CMA report, but still isn’t in the leasing report. So when I run a CMA for an investor showing what similar homes have leased for, I have to manually write down the square footage size next to each property in the right margin so we can properly compare them. Great software we have here, huh? It really make my job easy when I have to have a calculator and a pencil with me to suppliment the software I’m paying for. Thanks MarketLinx for MLXChange. When are you going to make it work right?

I sincerely hope to someday be able to write something positive about MLXChange, but I suspect it may be at least a year or two down the road at this pace. There are some things I like about it that we didn’t have with the old Tempo MLS System, bot those things are impossible to appreciate when the nuts and bolts don’t work right. When I need to run a CMA I need to be able to do it quickly and I need to know the numbers it produces are correct. Until then, the bells and whistles are useless.

I hope other MLS’s will carefully consider what they’re getting before they lay down the big bucks, like we did in Austin, to receive software that fails on so many different levels it’s almost hard to comprehend.