Homes in Austin are renting for 8% more than last year, on average. Average rent price for homes across the Austin Metro area was $1401 per month for March 2008 compared to $1295/mo the year before. The Median leased price remained about the same at $1200. Homes are renting fast this March. The average days on market was down to 37 days from 42 last year. The Median days on market was 26 compared to 28 days last year, which means half of the rental homes in Austin that leased through the Austin MLS rented in 26 days or less, and half took more than 26 days to rent.

The number of homes rented was down about 10%. More renters are renewing leases as fewer can qualify for home purchases than in the past several years. This is good for landlords. Note that our average rental rate of $1401/mo for March 2008 is still lower that the average of $1497/mo that renters paid in the year 2000 and the $1524/mo renters paid in 2001 before Austin rents tumbled for four years and bottomed out at $1235/mo in 2005. So we’re still trying to climb back to where we were 6 or 7 years ago.

Below is the data chart for March Rentals in Austin. Further below is a year to date chart, breakdown by city, and a historical graph of rental rates in Austin from 1999 through the end of March 2008. As usual, comments and questions are welcome.

Below is the Year to Date Comparison chart.


Below is a breakout by city. Notice that Austin-proper still commands the highest rents. Renters willing to be further out can get a lot more house for their money.

Below is a historical graph of rental rates in Austin TX. The graph speakes for itself. We boomed through the end of the 1990s until the tech bust and 9/11 in 2001, then the market tanked for 4 years until we finally started seeing an upturn in rental rates again in 2006. 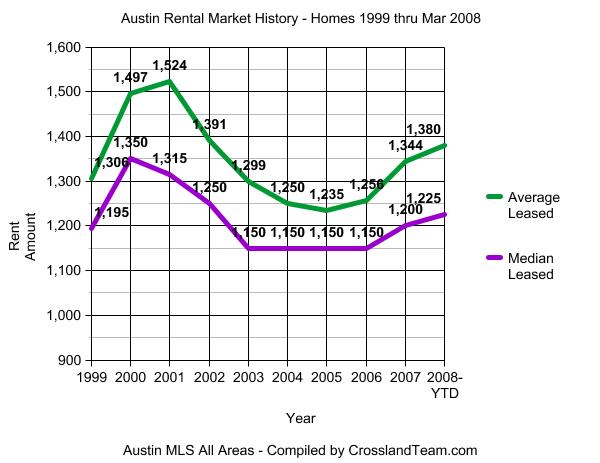