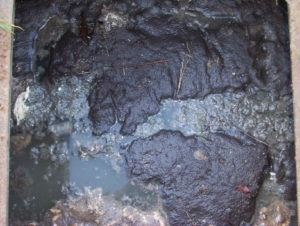 When purchasing a home with a septic system, who should pay to have the contents of the septic tank pumped out so the buyer’s inspector can properly inspect the tank and system?

I’ve written two offers in the past week for homes with septic systems. The septic system has to be pumped out at the time of inspection so that the inspector can properly inspect the tank. On both of these recent offers, I wrote into the contract “Seller to have septic tank pumped at seller’s expense prior to inspection”, and in both instances, the seller responded by refusing to pay for the pumping. These were the first and only two times I’ve had a seller respond in this manner regarding the pumping of a septic system prior to inspection. And they happened two days apart. The market is indeed still very strange!

It costs about $300 to pump out an average septic tank, but if it hasn’t been serviced in a while, or the exact location is unknown (not uncommon in older areas), there can be added expenses related to just finding the buried tank. The older ones especially will often have buried lids and thus require some poking around in the ground with a long skinny rod, and then some digging to locate the lid. That can cost another $125/hr, for the hunting and digging.

So, as a buyer, are you up for paying to hunt down the location of the seller’s septic tank, then paying to have what’s probably many years accumulation of the seller’s septic sludge pumped out and trucked away for him? I’m not. I don’t think it’s reasonable for sellers to expect a buyer to pay those costs. I’d place it in the category of “unjust enrichment”, since the seller is getting a freebie when it would otherwise be his cost as part of normal home ownership.

On one of my deals, the seller came around after I talked a bit more with the agent and requested that it be reconsidered. On the other, the buyer walked away not only over the septic pumping but also other issues about which the seller was unreasonable.

But wait, in a real estate transaction, everything is negotiable isn’t it? What’s unfair about the seller getting the best deal he can for himself?

Yes, everything is negotiable, but we’re talking about poop here. I just can’t wrap my mind around the violation of principle something like this represents. “Yes, Ms. Buyer, we’d love to sell you our house, but {snicker}, you have to buy a tanker load of our poop with it, and have it trucked outta here at your expense”.

The other issue is simply the already burdensome costs associated with the inspections on homes with septics. If you buy a city home, you will spend $300-$400 for your property inspection. If you find major problems, you’re out your $100-$200 Option Fee plus your inspection cost, (though your inspector will probably cut you some slack on the next inspection fee). So you invested $400-$600 to find out this isn’t the right property for you, or that the seller is unwilling to cure undisclosed/unknown major defects that change the value of the home.

Rural homes with septics often have wells also. So if you want a few acres 35 minutes outside Austin, in Dripping Springs or Bastrop let’s say, you’re going to have to spend your regular inspection fee plus another $300-$500 for the septic inspection, plus $70-$100 for a well inspection. You’re now in for $800-$1,000 just to complete your due diligence inspections on the property. If there is no existing survey, you’re going to cough up another $1,200-$1,800 for the survey (post option period) for this acreage compared to the $350-$450 survey cost on a city home.

So you have a lot more upfront associated with inspecting and buying a home with a septic and a well. It’s therefore a tough pill to swallow, for me, to run into a seller who thinks, on top of all that, my buyer should pay to locate his septic and haul off his poop. To me, that stinks. It’s a crappy deal. Every Realtor and buyer ought to be holding firm on this negotiating point, in my opinion. You don’t have to take that crap from your seller!

I assumed all did, for the aforementioned obvious reasons.

So imagine my shock and horror to learn that, in fact, many buyers do pay for the septic pumping. This according to a veteran septic inspector I spoke with. “Most agents and buyers just don’t know to write it into the contract, so there’s nothing they can say about it after that”, I was told. You gotta be kidding. Don’t know to write it in?

And, of even greater horror, I’ve also learned that some agents and buyers don’t even know enough to get the septic system inspected at all, even though the seller’s disclosures include information about the septic, and the fact that the property is serviced by an “onsite sewage system”.

A bad septic system can cost $15,000 to repair/replace due to newer, modern septic tank codes and rules. And, according to septic repair people I’ve now asked about this, many city folk don’t even become fully aware of the implications of buying/owning a home with septic system until their commodes stop flushing one day and they start making phone calls.

If they’re lucky, it’s just time for a pump-out and everything is ok. If they’re unlucky, they learn that the drain field is shot, and/or the tank has failed, which triggers a new permit and upgrade, and they’re going to have to spend $8,000 to $15,000 replacing a system they were unaware existed a few days earlier, and which they never had inspected when they bought the home.

That gives new literal meaning to being up sh*t creek without a paddle. Especially when that creek is now flowing through your front yard and your paddle costs $15K.

So, if you’re looking to get away from town, out in the county under the stars, make sure you know what a septic tank is and how to write the offer so that you don’t end up making what must truly be the most worthless and stupid purchase of a lifetime, the $300 tank load of someone else’s poop.

14 thoughts on “Wanna Pay for a Big Tankload of Someone Else’s Poop?”