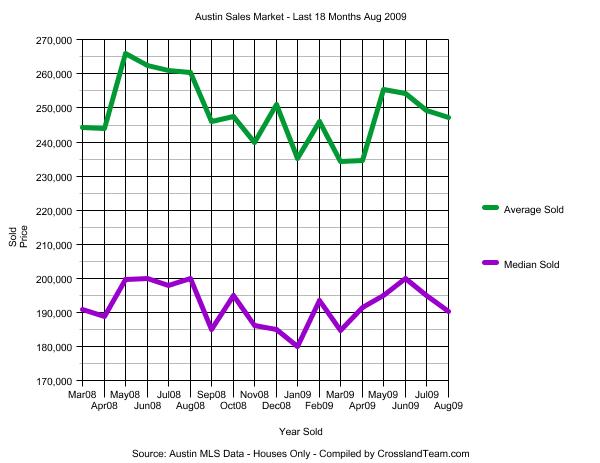 The Austin real estate market for Feb 2010 remained about the same as February a year ago. None of the measurable price metrics changes by more than a percent or two. Homes are selling faster though, and the number of failed listings (Expired/Withdrawn) is down considerably. Days on market is down 13% and the number of Exp/Withdrawn listings is down 13% also. This indicates perhaps a swelling in momentum.

Sylvia and I are seeing increased activity both with buyer inquiries and activity on our listings. Other agents we talk to are saying the same. The current tax credit incentive ($8K for first time buyers, $6,500 for move-up buyers) expires soon. Offers must be written by April 30th to qualify for the tax credit. This seems mainly to be motivating first timers. We haven’t heard from any move-up buyers motivated by collecting a $6,500 tax credit. The move-up credit is a farce because it requires the recipient to complete two real estate transactions, the cost of which would exceed the $6,500 credit. Only the people who were going to move up anyway will benefit from this useless freebie.

Upcoming factors to keep an eye on include the discontinued buying of mortgage backed securities by the government on March 31st. This has provided a marketplace for loans and kept interest rates artificially low, perhaps by as much as 1.5%. Interest rates should rise throughout the rest of 2010 and will probably be in the 6%+ range by the start of next year.

Then on May 1st, the tax credit ends which, combined with rising interest rates, could put the skids on demand in the lower price ranges. We need the lower price ranges to do well because the sellers of those homes become the buyers of the mid range homes. Of course there remains the national economy and unemployment as well. Improvement in the economy will lift consumer confidence and jobs numbers, which will positively affect the real estate market.

Below is the chart of stats for Feb 2010. Further below are the year to date and inventory stats.

Below is the Year to Date chart for Austin. Not much difference between the same period a year before, though both the average sold price and sold price per sqft are up about 2%.

Below is the inventory report.

The inventory is actually moving in a direction more favorable to buyers than sellers, compared to last month. The chart above doesn’t make that obvious unless you follow it each month. Equilibrium is at 6.5 months inventory, and every price range except the lowest is above that. Of course this is citywide and doesn’t reflect the fact that some pockets, such as South Austin, are very busy while outlying areas are very slow, even in the lower ranges.

The inventory chart, more than any other, and viewed in the context of upcoming increases in interest rate and no more buyer credits, causes me to question the strength of the Austin market at present. I think we’re going to pick up steam for the next 2 months then possibly hit calm waters through the end of the year, maybe even slide back a bit in prices, then pick up steam again spring of 2011 for a 5 year run of increasing prices and demand.