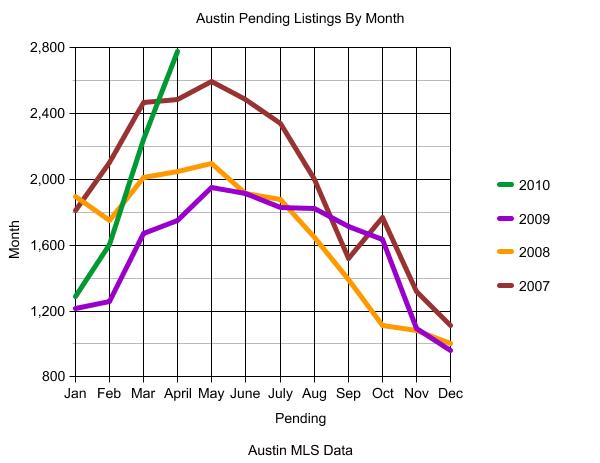 Take a look at this chart showing the number of homes that go under contract, or “Pending”, in Austin each month over the past several years. The green line is 2010. I could almost stop writing at this point and just let the chart tell the entire story. But have a careful look at the Austin real estate market behavior for the past several years, and then see what our government caused to happen in April and May with the $8K tax credit.

The writing was on the wall last month when I wrote about the Tax Credit Effect on the Austin Real Estate Market. We had a record number of homes go Pending in April, and May was looking pretty slow, and that didn’t change. So we end up with a record high followed by a record low month in terms of number of homes going under contract.

And in June, the hangover persists. As we head into the last weekend of what is historically the second busiest month of the year, the Austin real estate market is getting ready to lay another rotten egg. Thanks Tax Credit, for sucking the life out of the market, even with interest rates yesterday at 50 YEAR LOWS!. At present, we have about 1250 homes that have gone Pending in June, so even if we have a brisk next 6 days, you can look at the chart and see that June will remain substantially below the expected level under normal conditions.

What does this look like out in the field?

Well, it’s the old Tale of Two Markets. Some homes, not many, but some, seem to have had the proverbial magic faerie dust sprinkled on them and they are selling just fine. Sellers of these homes should thank God for picky buyers who get emotionally attached to one home. Other listings seem stranded, stagnant and dead in the water, even after huge price drops.  Of the homes that went Pending in May and closed, the median days on market was 43, meaning half of all sold homes sold in 43 days or less. Not many sellers would complain about that. But the Sold to List Price (Original List Price) ratio was 93%, indicating bigger than normal price drops averaging over 7%.

So where do we go from here?

It’s hard to say. The slow summer was something we assumed would happen because of the tax credit, but I’m surprised at the severity of the high/low swing. The other counter-intuitive thing that might happen though, is a busier Fall. We can only guess at this, but our Austin real estate market has been moving in off-cycle ways for over a year now, making it hard to predict trends. If that happens, the green line on the chart above may actually cross over the other three and finish Oct-Dec higher than preceeding years. This may be wishful thinking on my part, but I still thinks it’s a distinct possibility if jobs and the economy pick up by September in Austin, and interest rates start rising.

Sylvia and I do receive gobs of “Huge Price Reduction” emails from other listing agents daily though. One yesterday dropped from the high $600Ks to below $500K. Curious, I ran a CMA on the property and, based on sold comps, the high $600Ks didn’t seem over-priced at all. So pricing has become very difficult for sellers and listing agents. The sold comps mean less than they normally do and we instead have to look at absorption rates and competing home prices.

We thought interest rates would have started ticking up by now (which, oddly, will increase buyer activity when it does happen). The trouble in Greece and Europe actually caused our interest rates to drop instead, and now it seems rates could stay below 5% for the rest of they year, which wasn’t supposed to happen. Meanwhile, tighter lending rules, caused by government incompetence (like “accidentally” eliminating owner financing for non-owner occupants, and letting FEMA flood insurance expire such that no flood insurance can be written at all – stalling or killing the sales of homes for which flood insurance is required – including one of our listings), keep eliminating more and more quality buyers due to the over-correction of lending standards and stupid new rules. We have no investors to speak of because even quality borrowers are having trouble with the new ratio requirements. And many otherwise qualified buyers who would move up are instead stifled by these onerous new underwriting rules. Again, our government making things worse than it would be if it did nothing.

Bottom line:
Sellers and listing agents must increase the margin of error accounted for when pricing homes. My margin of error use to be 0%-3% on listing/sold price. Three years ago if I told you I could sell your home for $295K, the worst that might happen is a sale for $285K. Of that, I would be very confident.

Today, because things are so sluggish and hard to read, the margin of error is 0%-12%. Yes, 12%.That’s embarrassing. If market data indicates your home should sell for $295K, it might very well do so, but it would astound none of us if it ended up only fetching $260K. For sellers, that sucks. For smart buyers, that rocks.

7 thoughts on “Austin Pending Sales Update – Through May 2010”