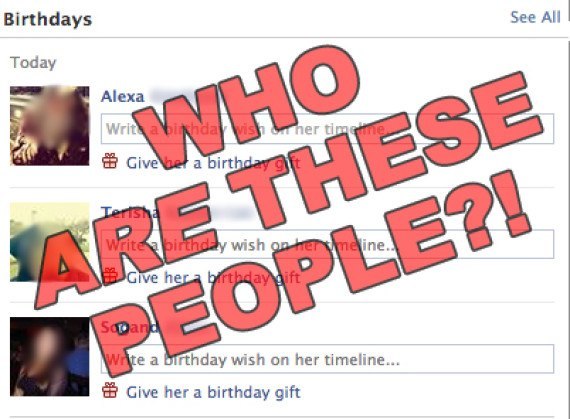 Last weekend we took a vacation to the Island House in Corpus Christi on North Padre Island for 4 days. While there, late one night, while checking email and logging into Facebook, I was presented with the following login message:

Your account was recently accessed from a location we’re not familiar with. For your protection, please review your recent activity to make sure no one is using your Facebook account without permission.

Reviewing your activity takes just a few moments. We’ll start by asking you a couple of questions to confirm that this is your account. (If we recognize your computer, you’ll be able to skip this step.)

I guess Facebook, in its infinite wisdom, thinks if I’m logging in from my laptop in another city (different IP address than usual), something might possibly be amiss, and I must therefore validate myself by passing a test. The “couple of questions” turned out to be a photo lineup of 7 “friends” whom I had to identify from photo arrays, selecting from 6 possible names for each individual, or choosing “I’m not sure”.

Only two selections of “I’m not sure” are allowed, and ZERO incorrect answers are allowed. Each “friend” has two photos to review, some which are indistinguishable, my favorite being when the square surrounds a tiny spec of a face within a picture hanging on a wall in the background.

But mainly, with most photos being of decent enough quality, the question remained, Who are these people?! (my “friends”). I don’t recognize any of them, let alone enough to go 5 for 5. Each failed effort requires a 1 hour waiting period before a new try. Meanwhile, my iPhone access still worked, as did the granted permissions from 3rd party tools such as Ping.fm, from which I make most of my status updates, so I wasn’t totally “gone” from the standpoint of status updates, but was unable to log in from a web browser and do anything on Facebook.

This morning I’d had enough. Somehow I would defeat this validation system and regain control of my Facebook account. I finally did. Here’s how.

First of all, how did I end up with a bunch (718) of “friends”, most of whom I can’t even identify in a photo? For starters, Facebook founder Mark Zuckerberg stated long ago that a “friend” on Facebook isn’t like a “real life” friend. He or she is simply a Social Network friend with whom you’d like to be connected for some reason, perhaps because you share a common connection such as graduating from the same college, or you’re both onto knitting, you’re friends with common friends, or you share the same occupation.

In my case, the latter category was the culprit. More specifically, as a former member of the Keller Williams “network” on Facebook, and as a Realtor, I accumulated a bunch of Realtor “friends” online. This would be the key to figuring out how to reclaim my login.

As I stared at the first set of photos this morning, again wondering “who the heck is that?“, it occurred to me that the unknown person was most likely a Realtor, and thus, if I Google their name + “Realtor”, there is a good chance I might find a photo of the Realtor with that name and be able to compare it to the photo I was evaluating.

And so, one by one, I cut and pasted each name next to each photo and added “Realtor” to the end. One was a dead on match. Easy. One down, four to go. For two others, reasonable guesses had to suffice because, oddly, the “real life” facebook photos of some Realtors (one male, one female), taken at a picnic for example, and grilling a burger, cause those poor Realtors to look 20+ years older than the professional photo headshot which appears on their websites!

This required a lot of back and forth, studying of eyebrows, nose shapes, hair style, shape of mouth, etc., to try to be as certain as possible. For the female, I just picked the one that looked most like a daughter of the subject. For the male Realtor, I had to enlist the help of my 17 year old daughter. “Could this possible be that guy?”, I asked, after ruling out all the others. She agreed that it could be him – the eyes looked sort of the same – but she couldn’t be sure either. Remember, no wrong answers are allowed. I made the selection and proceeded, fairly unsure if it was the right pick. For the next photo I lucked out and had a Realtor Convention Photo, and there right on his shirt, was a big name badge with the first name visible and readable.

For the final photo, in some sign of devine intervention since I was all out of “Not Sure” answers, I got someone I actually know and recognize in real life and who looks exactly like her photo. This was the first time it had happened in all my attempts.

And then the moment of truth… the final click… and …. low and behold, I was back in!

Jeez. I’m not even what I would consider “addicted” to Facebook, but it really irked me to be locked out like that. There is no way to reach someone at Facebook by phone – I tried. All solution efforts direct you to the help page, which says you simply have to answer the questions correctly. I’m now seriously thinking of unfriending people I don’t actually know again.

But, really, how stupid is it of Facebook to constantly be suggesting “friends”, trying to get us all to add people we don’t actually know, and then to use face recognition of said “friends” as the one and only way to prove that the account is yours after they lock you out.