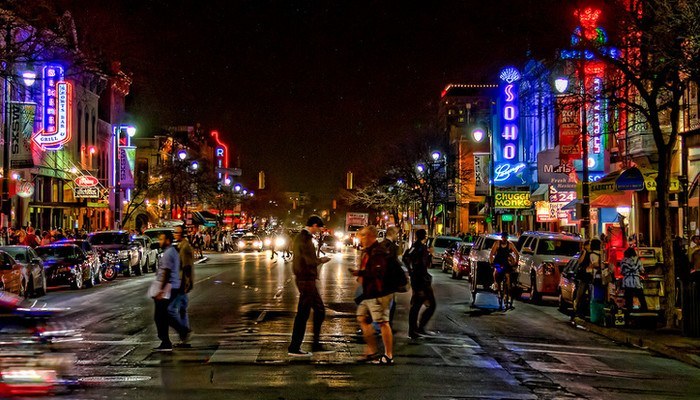 Sylvia and I attended a friend’s birthday party last night at a local restaurant. We were among the oldest people there, but we blended in just fine. I met a college guy who just recently graduated McCallum High. Our friend is in his mid 30s and the crowd of guests ranged from young 20s to late 40s/early 50s. The music being played was 1970s “Go Go” music, of which our friend is a fan. It was a typical Austin get-together of a diverse group of friends and acquaintances having fun.

My 48th birthday was last week. I’m either in denial about aging, or Austin is just a place where we don’t really feel like we’re growing old. I still feel the same youthful exuberance I did when I first moved here in May 1985 at the age of 22, only I’m a bit wiser and more financially responsible now. The hard-partying days are behind me. And I have 14 and 17 year old kids and, thus, a different set of worries and priorities.

But Sylvia and I were with a more age-homogeneous group of friends the night before. This was a bunch of her old real estate pals from the 1980s. She was an outside sales rep at GranTree Furniture back then and did sales calls at apartments, lease-locator companies and real estate offices in Austin, trying to sell furniture. She became friends with a large group of real estate agents. They would eventually talk her into getting her real estate license, which she did in 1988 (in the middle of the worst real estate market in Austin history), and she became a Realtor instead of an interior design specialist.

Anyway, as I looked around the table at these dozen or so veteran real estate people, I thought that I certainly can’t look as old as they all do. To me Sylvia looks the same as she did when I met her at age 29. We all certainly act about the same. Why is that? Why aren’t we all members of an Elk’s club, or the Moose Lodge, as our parents were at the same age when we were growing up, playing bingo on Saturday nights and showing up for $1 cornbread and beans on Wed nights? Drinking bourbon and water and playing darts and shooting pool? Why weren’t the women at the table wearing “old lady” clothes instead of the good looking outfits they had on? And us guys were all wearing what any 20-something would be wearing in Austin on a night out.  Yep, we live in a town where a 20-something could borrow clothes from a 40-something, noone would be the wiser.

Aren’t we supposed to dissolve from the Austin lifestyle “scene” once the grey hair starts coming in. How dare us show up at ACL Fest next week, wearing sneakers and jeans. Who gave us baby boomers permission to invade and take over Facebook and to learn how to Text? Why don’t I own a recliner-rocker and drive a Buick 4-door like good Dads my age should?

Because I live in Austin TX, where growing old is not an option, and staying cool is easy.

So, is it just me and my imagination or is there in fact something uniquely ageless about Austin, it’s lifestyle and vibe, and its people? I think there is, though as I type, I’m wondering if I’ll be able to put it into words. Perhaps, in fact, people my age really are old, boring and out of the loop of all things wonderful and cool about Austin. Perhaps it’s just my constant interface with people moving here, many who are younger than me, that keeps me connected and plugged into to the vibe and vigor Austin offers. Maybe me and Sylvia are in the minority. Thus, maybe the premise of this blog article is invalid. Hmmm.

Or maybe Austin really does have something going on that other cities lack. I think it does. Live music for one. It’s everywhere, and it’s good music. Even at a ratty little BBQ joint like Green Mesquite on Barton Springs Rd, there is free live music in the beer garden out back. We have UT and other area universities and colleges which provide a constant influx of youth culture and vibe, which bleeds out to the rest of us in, at minimum, an indirect way. Austin offers outdoor amenities and activities that preserve youth, or youthful feelings, such as swimming at Barton Springs, Deep Eddy or Twin Falls. Heading out to the Lake Travis, or tubing down the Guadalupe. Of course, one has to avail themselves of these activities to receive the benefits, but I think many Austintes do.

Also there is the quirky “Keep Austin Weird” vibe which, I think, gives us permission to loosen up and relax and not take life so seriously. Indeed, there are exceptionally few restaurants in Austin where shorts, tee-shirt and sandals would not be welcome, if not normal, attire. It’s as if the entire aura of Austin is one that says “you don’t have to act and dress like you’re all grown up”. We are free to “ChilAx” (as my daughter calls it) in Austin, and it’s ok.

An exhaustive research into this topic would look into the percentage of “boring old people” stuff that sells in Austin to see if it’s substantially less than what sells to similar age demographics elsewhere in the country. For example, do Sears, JC Penny and Bealle’s sell the same product mix in Austin as they do in, let’s say, Oklahoma City, where “hip” is something that breaks when you slip coming out of Luby’s? Or does the JC Penny apparel line have to be adjusted for Austin because people here dress differently, more casual and relaxed? How many Mercury Marquis sell per capita in Austin versus Des Moines Iowa? It would be interesting to know.

I don’t have the resources to do the proper research so I’ll have to go with my gut instinct and say that Austin is in fact a place where we all remain younger longer, and we enjoy a more youthful lifestyle and a broader mix of social activities with a wider range of people than do those in more traditional, fuddy duddy cities in the U.S.  And that, among other things, is what makes Austin a great city in which to live and not grow old.

5 thoughts on “Does the Austin Lifestyle Keep us all Feeling Younger?”