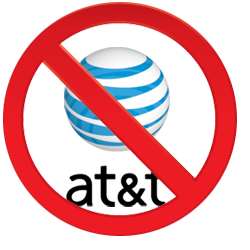 Thank you for the nice letter you sent me after I terminated my business phone service with you and switched to Ring Central. I had no idea I was such a coveted customer. You did such a good job of fooling me into thinking I wasn’t important through your nearly 20 years of abuse and poor customer service. Wow, you really did love me though. I guess the joke’s on me, you stinker!

The outside front of the envelope containing your love letter to me has printed in large-font blue lettering “We miss you already“. Awe, shucks. Really? I’m blushing. Immediately below that is something that you had heretofore not shared with me, “How about Broadband and Unlimited Nationwide Calling, now starting at $60/month*? Plus, a one-on-one business consultation. Details inside”.

Wow, if I knew you had such a great offer that you weren’t telling me about, I would have left sooner! As soon as my goosebumps settled, I opened the letter to be greeted with more love. “We want you back”. I especially like how, after almost 20 years as a loyal customer, I’m affectionately known to you as “Dear Business Customer”.

But the overwhelming amount of goodness is ladled on even thicker in the rest of the letter.

You invite me to “Come back today and get it All for Less. Now starting at $60 a month”, and you say that I can “have everything you need and nothing I don’t”. Fancy words. Very enticing.

But here’s the thing, AT&T. You truly do suck, and you always have.

Remember when I moved my business line from Travis Heights to a new location in South Austin in 1996, and you screwed up the order and caused a “this line has been disconnected or is no longer in service” message to be played to my business callers for three days before you fixed it? Remember that?

Remember in 1997 when I moved again and the same thing happened? By the time I moved in 1999, I got smart and set up a new line in my new location first, with a brand new phone number before moving. Then, after telling me my old business number would port to the new office location on Manchaca Rd, you told me it wouldn’t. That was fun. I had to move it to a neighbor’s house and manually forward it to my new business number as a workaround.

In fact, I don’t think I’ve ever had a trouble free move with AT&T. Remember in 2007 when I moved to a new house I built in Granada Oaks 3 blocks from my old house, and when the number was switched you discovered you had not yet run the fibreoptic from Hyw 290 to the new Granada Oaks neighborhood? Guess someone just forgot about that when you took my move order. And remember how, once again, my business callers heard “this line has been disconnected or is no longer in service”?

And remember how I had to file a formal complaint with the Texas Public Utility Commission to get a higher-up at AT&T to call me and then suddenly, that day, you were able to hard-forward my business phone number to my cell phone temporarily after you had previously emphatically insisted that it wasn’t possible?

And remember how, at my new location in Westlake, I’ve had pooor line quality since day one? My lines crackle when it rains and sometimes even when it doesn’t rain. You sent a guy out and charged me over $500 for him to troubleshoot the problem only to tell me it’s my fault, my lines, and it would cost $180/hr to keep troubleshooting? I’ve suffered for a year with those crackling phone lines and and determined myself that they crackle at the outside connection by simply plugging a phone into the demark, meaning the problem is on your side. But since you’re so difficult and expensive to deal with, and I don’t trust you to not rip me off, I never had you back out to try to fix it. Most of the time I just had calls manually forwarded to mine and Sylvia’s voicemail system from where calls could be routed to our cell phones instead of the landline. Also, as you know, you’ve been overcharging me for this lousy service just because I wouldn’t sign a contract and be locked in to your service.

Also, I now have TWO business lines, so Sylvia and I don’t have to take turns making business calls from a land line, or use our cell phones. And, oh, the line quality is beautiful. It’s the cleanest, quietest sound quality I’ve ever had. It took some getting use to, hearing absolute silence on a phone line, but that’s what my Ring Central phones sound like when noone is talking.

And guess what else? I have free long distance and super cheap (pennies per minute) international calling. Remember back in 2006 when you charged me a total of over $400 for those calls I made to a client in Germany because – stupid me – I apparently hadn’t subscribed to your “International Plan” and didn’t realize that you would charge over $5 per minute for those calls. $5 per minute. You’ve got some nerve AT&T. Well, I don’t have to worry about that sort of thing anymore.

Oh, and this is really cool, with my new Ring Central system, it allows me to have calls ring my cell and desk phone simultaneously, so I don’t have to remember to forward lines when I’m in the field, I can just answer from whichever phone I’m at. Ain’t that cool, AT&T?

And if I want to return a call from my cell phone without giving away my personal cell phone number, I just use the RingCentral iPhone App to dial out and talk. The person I’m calling sees my business phone number 512-327-3900 as the caller ID. When Sylvia travels to Europe next month with a friend, she’ll be able to use her Ring Central App to make Voip calls for free back to the U.S. whenever she has a WiFi connection.

Meanwhile, we’ll need to do lots of Googling and reading before she goes to Europe to learn exactly what settings are required to be turned off on her iPhone to avoid another one of your super high surprise bills. You really make your customers work hard to avoid your predatory billing practices.

Oh yeah, my last regular business line phone bill from you, AT&T, was a total of $162.92, for ONE crappy, noisy business line. This included 17 different line item fees and charges, plus $46 in long distance charges.

My Ring Central invoice, for TWO lines of service and a bunch of amazing bells and whistles is $92.72 total, with no long distance charges because it’s included. The bill is just a single page, simple to read.

And, unlike your AT&T customer support system that suckers callers into 7 minutes of button pushing and holding only to be finally told at :02 after closing time to call back during business hours, RingCentral has 24/7 customer support and people who know something about the service on the other end. I can call at midnight if I need something. But other than getting set up the first week, I haven’t needed their support because everything just works.

So, even though I know you still love me AT&T, and you really, really want me back and would even be so generous as to rip me off for less than you have been, I have to say I’m not coming back. No way. It ain’t gonna happen, ever, in my lifetime. I’ve never felt so free since escaping your horrible tentacles with my business line. Now, you do still have me as a home customer, and of course we have the iPhones, but that will eventually change as well. The home phone will for sure, later this month.

Maybe you should start showing some love and good customer service to your existing customers instead of your departed ones. I won’t be coming back. I never loved you. I only remained in the abusive relationship with you because I felt trapped. But no longer. Adios AT&T.  And don’t bother sending me anymore pathetic letters.

9 thoughts on “Dear AT&T, I Received Your Love Letter”