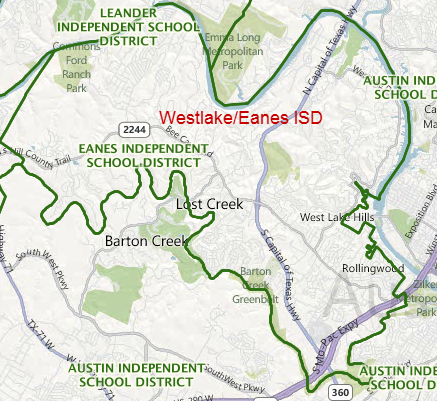 Where exactly is “Westlake” in Austin? Well, it depends on which boundaries you use. In the broadest sense, “Westlake” is considered to be those areas which attend Westlake High School, or those areas within the Eanes ISD boundaries, as shown on this map.

So, in general terms, the area west of Austin known as “Westlake” is everything that feeds into Eanes ISD schools.

The 78733 zipcode is also contained within Eanes ISD. This includes neighborhoods such as Barton Creek West and Cuernavaca. But if you ask people there where they live, they are more likely to self-identify with the neighborhood rather than say “Westlake”. See map below. But isn’t Westlake a separate city? Yes, it’s the City of West Lake Hills. See the map below and the area in puple, which shows the actual boundary lines of the municipality known as West Lake (two words) Hills.

Notice that the city of Rollingwood is also located within Eanes ISD. People who live in Rollingwood would probably self identify as “Rollingwoood” residents instead of “Westlake”, though they live in the “Westlake Area” and attend Eanes ISD. The blue area just south of the municipalities of West Lake Hills and Rollingwood is technically inside the boundaries of City of Austin. This is the area north and northwest of Barton Creek Mall and includes subdivisions such as Woodhaven and Bee Cave Woods.

Residents of Woodhaven and Bee Cave Woods live in “Westlake”, but not inside the municipality of West Lake Hills. Sylvia and I live in Woodhaven, in Westlake, just a few blocks from Westlake High School, but we are residents of the City of Austin. Woodhaven is within walking distance to three Eanes schools – Cedar Creek Elementary, Hill Country Middle School and Westlake High. Thus, the neighborhood is heavily populated by families, as is Bee Cave Wood. In fact, we moved here specifically to be walking distance from Westlake High, though we also enjoy the awesome west/central location.

Finally, where exactly is Westlake High School? Surely it’s in West Lake Hills, right. Nope. It’s actually not located within any municipality. See the map below.

See those white areas on the map, and where I type “Westlake High School” in red? Those are unincorporated areas of Travis County. So, any crime at Westlake High would fall under the jurisdiction of the Travis County Sheriff, not West Lake Hills or City of Austin. People caught speeding through the school zone at Westlake high will be issued a ticket by the County.

So, if any purists would wish to argue that “Westlake” is only those areas located within the municipality of West Lake Hills, they would also have to say that Westlake High is not in Westlake. I’m sure there is a tax, finance or other logistical or political reason for leaving Westlake High in Travis County instead of annexing it. I haven’t investigated that, but it does seem odd that it’s not located inside West Lake Hills.

Hopefully you have a better sense of where “Westlake” is now. To me, it’s easiest to just think of it as those areas with Eanes ISD, per the first map above,. When a buyer says “we want Westlake Schools”, that’s what they mean.

8 thoughts on “Where is Westlake, or is it West Lake Hills?”