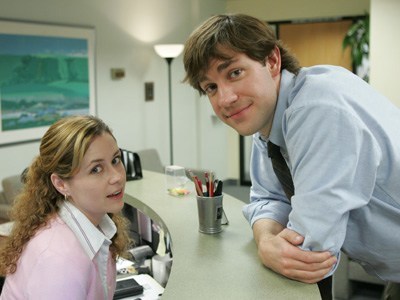 Everybody loves Austin. Or so it seems. If the recent Forbes article “Austin Envy” wasn’t enough (though it mistakenly claims we still have Austin Hippies – we don’t. And, please, NOBODY refers to Austin as “Silicon Hills”), the final proof was in the finale of The Office, in which Jim and Pam decide to leave Scranton PA, bound for, of course, Austin, TX.

This makes sense. I mean, what other U.S. city could they have decided upon? Pittsburg? Phoenix? Orlando? No, the writers of The Office got it right. Jim and Pam are likable characters. We want the best for them. They’ve paid their dues in the decaying armpit that is Scranton PA, and they are deserving of a bright and optimistic new life. Austin is the only U.S. city for which this “new beginnings” story line would work. Fans can cheer the decision to move to Austin like they can no other city. It requires no explanation. It’s, like, “of course”. Self-explanatory. And we can feel good about that for them.

And what should Jim and Pam expect when they get here? Where will they live?

The Austin home sales market has gone crazy. Home prices, though “affordable” when looking at the entire metro area ($200K median), are rising quickly in the central areas of Austin ($400K median value) that make it unique and cool.

Most parts of Austin are, in fact, Anywhere USA. Traffic is terrible, and getting worse. The most affordable outskirt areas have “toll road overhead”, higher property taxes, and higher utility costs than Austin proper. Throw in cookie-cutter DR. Horton housing – the same stuff you’ll see in Las Vegas or Phoenix – which represents the antithesis of the “Austin Vibe” and, well, those areas are not that special. The prices are cheaper out yonder, but the total cost of living is not as cheaper as people think, once all costs are properly factored in. And your daily living experience, save for forays into Austin proper, is nothing unique.

So where will Jim and Pam end up?

Since money will be tight with Jim working in the start-up, and Austin is the perfect stay-at-home mom town for Pam, and they’ll need good public schools for the kids, I predict Jim and Pam end up in Pflugerville. It’s reasonably close to downtown, has some good schools, and recently, in an article I read, was referred to as “becoming hip”. Hmmm.

Either there or Maple Run in SW Austin if they can afford a home for $225K or thereabouts. My vote would be for Maple Run, in the 78749 zipcode, but they’ll have to battle against other buyers in multiple offer situations before getting a home.

But,  glib joking aside, it’s a serious question. Where do young couples with small kids who don’t want cookie-cutterville but need good schools, and want to experience living in Austin go now? Where can they afford to live?

The areas of consideration are increasingly shrinking. I’m sad about that. Sylvia and I benefit from a strong healthy real estate market as our business thrives, but I worry about my own kids, now 17 and 20, and whether or not they’ll be able to afford to raise their future families in the same neighborhoods they grew up in.

Both were born in Travis Heights. Then we moved to Cherry Creek in South Austin, off Westgate, then Oak Hill for 11 years in 3 different homes, then to Westlake for the high school years. Our modest neighborhood of 1970s tract homes has exploded in value the past 12 months such that a typical 1,800 sqft 1978 rancher is now worth $500K. That’s more than $100K higher than the prices 3 or 4 years ago.

In 2010 , I listed a Plain Jane 3 bdrm 1 bath house in 78704 that failed to sell. We couldn’t give it away. The hand-wringing parade of crybaby buyers had a litany of objections. It was a different market then with buyers, unsure, unwilling. I advised the seller to pull the listing and wait a few years. We recently relisted it for $275K and, after the multiple offer dust cleared, it was under contract for $331K cash in 36 hours. That’s crazy. But in 2 years, that will seem like a great price, so these buyers, in my opinion, were smart buyers. But there goes the “affordable” central housing stock. It’s all disappearing toward the upper end of pricing.

The affordability train, what’s left of it, is leaving the station in Austin. Jim and Pam better hurry up and get here if they don’t want to end up in Pflugerville.

8 thoughts on “In Which Area of Austin will Jim and Pam End Up?”