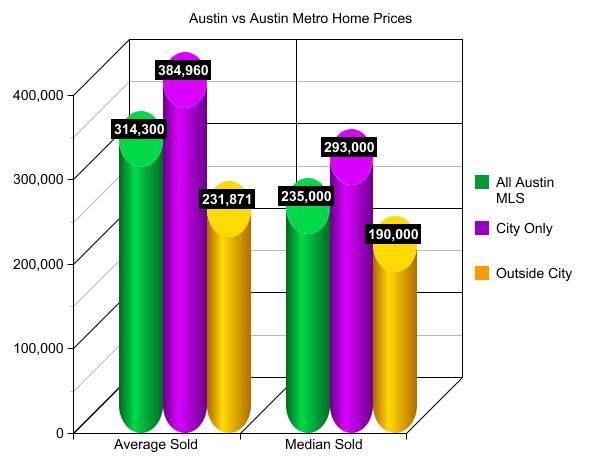 When you read a news article about Austin real estate that reports average and median home prices, the values quoted are often those from total Austin MLS sales. Those sales figures are compiled from the entire Austin MLS service area, including suburbs, nearby cities as well as some far flung areas. The “Austin MLS” might more accurately be referred to as a “Central Texas MLS”.

Those values are represented in the green bars in the graph above. To those thinking of moving to Austin, a median price of $235K sounds pretty affordable. It means half of all houses in “Austin” sell for less than $235K. A buyer with good credit earning the Austin median family income of $65K annually, can qualify for a mortgage payment of $1,950 per month at 5%, or a $266K home. Austin seems like a sweet deal and a great place to live to an outsider reading about it.

But when people think of “living in Austin”, they envision living in the city that attracts all the attention and creates all the buzz. The home of the Austin City Limts music show, South by Southwest (SxSW), the ACL Festival and much more. They think they will have an “Austin” address and be living in the city of Austin. But the cost of living “in Austin” is much different than living in the “Austin Metro Area”.

So, if you’re “moving to Austin” and are willing to forego an “Austin” mailing address, the average prices just 10-15 miles out are $150K cheaper. Or, stated another way, if you want to live in the City of Austin, average home prices are, on average based on 2013 sales, $70K more expensive than the published average price of $314K. To be fair, this is probably true in many US cities with a vibrant urban core. It’s just become more pronounced in Austin in recent years.

What Does 2014 Look Like?
As of this writing, there are 708 single family home listings for sale in Austin, excluding condos. The average price of those listings is $526K. Median list price is $362K. Only 25% of those listings (178) are priced at $235K or less. None of the sub-$235 homes are located in Central Austin, they are all in Austin suburban neighborhoods.

Available homes in Austin are limited, and inventory will continue to shrink this year relative to demand. This means prices this year will continue to increase at a rate higher than average. The train is leaving the station on Austin Affordability. Meanwhile, the area surrounding Austin remain some of the fastest growing in the U.S.

Thank you for this article. I am too lazy to dig up this valuable info, so I appreciate the graphic and your take. I was thinking the market would have a modest increase, but with that low of inventory and the whole nation looking at Austin, I think you may be right. We shall soon see!

[…] Past and Future Values The median value of a home in the Austin Metro area is now about $250,000. Average value will probably break $350K this summer. A decade ago median […]