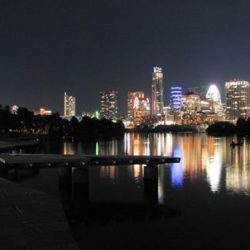 I often experience something many Austinites will never know. A quiet uncrowded Austin. No traffic. No noise. No crowds. Just peaceful serenity and bliss.

There is no turning back – no solution – for Austin’s traffic problems, congestion, growth, commercial encroachment into central neighborhoods, and myriad other small and big annoyances caused by Austin’s economic “success”. We all have to develop coping mechanisms to keep our sanity intact. Resistance is futile. You will either assimilate, or move away in disgust. I don’t want to leave Austin, I want to Love Austin. I want to keep that love alive. So I’ve adjusted my personal lifestyle and business practices in ways that equip me to better cope with the new reality of life in Austin. Here’s what I do.

Wake up at 5AM and go Running
You don’t have to run, you can walk, or do something else. Either out your front door through your still-sleeping neighborhood, or drive to your favorite hike and bike trail, park, or the gym. There will be no traffic. The city will be yours. At 5-6AM, there are typically only about 3 cars parked under the Mopac bridge at Town Lake.

Running (or walking) around Town Lake (aka Lady Bird Lake) in the pre-dawn silence, under the dim light of the Zilker Moon Tower, and the distant glow of downtown Austin, is as peaceful and quieting an experience as one can know. When I do this, usually Sunday, Monday and Thursdays, I do it unplugged. No iPod music. Just the dark silence of the morning. I usually encounter no more than a few others on the trail, depending on the weather and how early I go. By 6AM, the trail starts slowly populating, but is still uncrowded, and by 7AM, the normal early birds are there, the sun is up, and it’s no longer deserted.

Before I took up running, I did gym workouts. I woke up at 5AM and drove to 24 Hour Fitness 5 days a week. While the gym isn’t desolate at 5:30AM, the roads getting there are. So much so, that in contrast to normal Austin traffic congestion, the drive itself is oddly meditative and relaxing. And the gym isn’t crowded like it is during the afternoon, so you’ll have no trouble getting an Elliptical, Spin Bike or weights. On your drive back, the roads will have started to fill, between 6:30-7AM, but still not crowded yet.

Some mornings I just go out my front door through the neighborhood and run. It’s quiet, with nobody around other than the occasional other shadowy runner or walker. Sometimes a cyclist. And that car that delivers newspapers with its flashers on.

I have friends who wake up early and read scripture, do affirmations, yoga, or meditate before the rest of the family wakes up. This is another way to fill yourself with quiet contemplation.

Why do this? Why be an early bird? No matter your method, if you start your day by claiming your own quiet time and space, staying off your computer, phone or tablet, it acts as a sort of innoculation for the hustle and bustle that has replaced Austin’s former laid back, slow paced lifestyle. It provides a mental shield to deflect the hectic happenings of the day ahead.

Time Shifting
If I need to drive to Pflugerville to take a sign down from a sold listing, there are limited slivers of time that I will make that drive. Not between 7AM-10AM. Not between 3PM-7PM. Not at Noon. Same with Leander, Cedar Park, Dripping Springs. South/SW and Central Austin are easier to get in and out of from where I live, but I try not to go anywhere at all on Fridays after 3PM, when traffic is its absolute worst in Austin.

Of course this isn’t always possible. Appointments and errands are not always flexible. And if you’re a commuter, having to arrive and depart work at a specific time Monday through Friday, you don’t have the luxury of time shifting – yet. I think traffic congestion will someday, within 5 years, force Austin employers to start thinking of creative ways to help employees avoid daily traffic gridlock. Not every job lends itself to flexible scheduling, or working from home 1 day a week, or 4 day shifts, but necessity is the mother of invention, so we’ll see what the future brings.

Shop Late at Night or Very Early
Like to grocery shop at Trader Joes? Go at 8PM. There is nobody there. It closes at 9PM, but you’ll be in and out way before then. And the traffic to and from will be light. Need an oil change? Be there at 6AM when it opens. Have a Sams Club Plus or Business membership? Go at 7AM for the early entry when it’s not crowded, before regular members are let in. Don’t schedule your dentist appointment at 4PM on a Friday, schedule it at 8AM on a Wednesday like I do, at a dentist minutes from your house.

There are a lot of other things I haven’t mentioned, like pre-prepping you entire week of meals on Sunday to reduce the time and stress of dinner preparation throughout the week. So even if you are stuck in a daily commute home, you at least reclaim some of that time through proactive preparation.

If you apply this principle to everything you do, applying proactive time management and congestion avoidance to your daily life in Austin, you’ll recapture a lot of time wasted in traffic and dealing with crowded places. 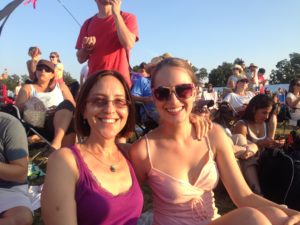 I don’t always avoid the chaos and crowds. Sometimes I purposefully head right into the middle, on my own terms. We enjoy the madness of ACL Fest in Austin. Many travel from all over the world to hear the music. For us, it’s 3 miles from our front door.

Another example is when I decided to hit the Town Lake trail at 10AM on a Sunday a couple of weeks ago. It was choked full of people. Amatures with baby strollers, kids on bikes, lots of dogs, walkers and groups of friends walking 4 abreast, oblivious that they are blocking the trail and slowing others.

Not the ideal running experience, picking my way through people, dodging dogs and bikes, but I rather enjoyed it and soaked up the vibe of so many people getting out to experience the outdoors and a walk around the lake. Austin is a vibrant city and it’s nice to see the positive aspects of that. It was fun, and a break from the norm. Not something I’d do every day, and it would in fact be annoying to do it every day, but in small controlled doses, allowing ourselves to experience the “crowded active Austin” does have its benefits.

Conclusion
We use to live life in Austin without having to think of all this “time management”. Back in the 1980s and most of the 1990s you could get to and from just about anywhere in Austin, including suburbs, in under 20 minutes. 30 at most. But that Austin is gone. It’s history. This is a new city – dynamic, growing, exciting. But also annoyingly congested and crowded. By preparing yourself both mentally and logistically, and keeping an open mind, you can navigate the new Austin like a pro, and enjoy all the positive aspects growth provides, while protecting yourself from as much of the negative side effects of growth as possible.

I do a lot of the same things that you do… but only just realized it. Now that I look at it, huge portions of my day now revolve around trying to sync up what I want to do with when it won’t be overrun with people.

I grocery shop at 7-8 a.m. I won’t drive a freeway between 7-10 a.m. and 3-7 p.m. Lunch? I have a few spots that aren’t trendy that I know I can eat at a decent hour without waiting a long time. I don’t even bother going out for dinner Fri/Sat night.

The more I think about it, the more that I realize that you don’t really “live” in Austin. You compete. No, it’s not competing like NY, SF, or LA. But you compete nonetheless. You compete for housing, parking, to go out to eat, to drive, etc.

Life is taking me out of Austin for the next year, and I’d be lying if I said I wasn’t looking forward to the break. I plan to come back, but it’s not set in stone.

But for all the growing pains (and there are a lot), I have to say that it’s the people that keep me sticking around.