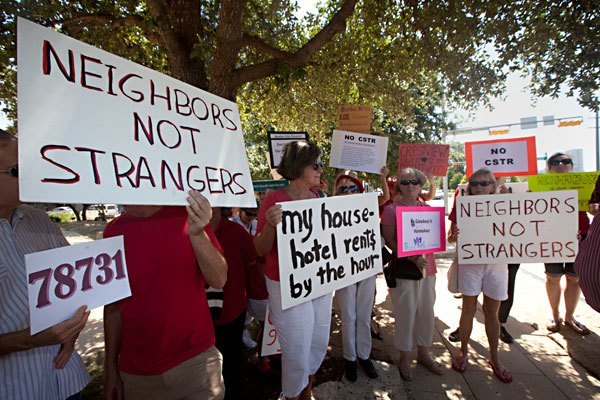 Almost a year ago I wrote about the Austin Short Term Rental (aka STR, Vacation Rental, VRBO) issues surfacing in the Austin community. That blog article generated 57 comments and a lot of heated back and forth. I eventually had to close the comments for that article because I felt everything had been said that could be said at that stage of the process. This article is an update on what has happened with STRs in Austin since the last blog post, and what will happen next.

The issue has moved forward through a “Working Group” process which concluded last August. City Staff is currently reviewing a draft set of regulations. The full Planning Commission will consider the recommendation after City Staff finishes the review. From there, a Code Amendment and set of new rules will be sent to Austin City Council. That probably won’t happen until 2012.

The Working Group Process
I participated in the Working Group process in the role of a Government Affairs Committee member of the Austin Board of Realtors. The Austin Board of Realtors involves itself in any local issue which could affect the private property rights of home owners. In many ways, ABOR is somewhat of a “Silent Knight'” working for the benefit of Austin homeowners, though most home owners are probably unaware that they are served in this manner.

ABOR seeks to protect the rights of property owners and opposes rules or laws that would diminish the private property rights of Austin property owners. The ABOR position on Short Term Rentals in Austin is, in short:

The Austin Board of REALTORS® supports preserving the character of Austin neighborhoods and protecting the quality of life of its residents. ABoR also believes homeowners have a right to lease their homes, regardless of the length of the lease, without municipal licensing requirements or registration fees. We also believe that the City of Austin should hold formal stakeholder meetings to address the issues concerning short-term rentals and develop a solution that balances the needs of neighborhood residents and residential property investors.

The stakeholder meetings did occur, a middle ground was determined which, as predicted in my earlier article, didn’t give either side the warm fuzzies, but that’s how these things go. 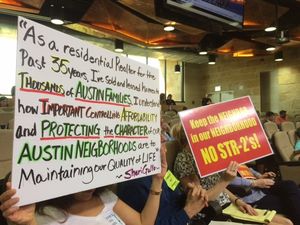 Last week I attended the VRBO “stakeholder’s meeting” held by the city of Austin. The meeting was the first in response to growing complaints from neighborhood groups and individuals about the burgeoning VRBO (Vacation Rental by Owner) business in Austin. There were over 100 attendees representing both sides of the debate, as well as some just there to listen, like me. The discussion was lively.

The Anti-VRBO Point of View
Imagine living next to or across the street from a VRBO house in Austin. This home is essentially a guest house for vacationers, year-round. You’re nowhere near a lake or vacation spot. You live in Allandale, or Barton Hills or Travis Heights. Each year, you witness a parade of 50 or more different groups, in and out of the home – every weekend – coming to enjoy UT football, ACL Fest, South by Southwest, and any number of other Austin attractions. Even if the visitors don’t cause problems, have loud parties, or otherwise bother you, you’d still probably rather have a family or other permanent residents living in the home. You’d rather have actual neighbors in your neighborhood instead of a constant stream of strangers on vacation or visiting locals.

The Pro-VRBO Point of View
Imagine you own a home, well located in central Austin. Perhaps you inherited it from a parent, or you purchased it many years ago and kept it as a rental when you moved to the suburbs. For whatever reason, you’d like to hang on to it. Because of the high property taxes, it doesn’t work well financially as a long term rental anymore, with taxes and insurance alone eating up more than half the gross annual rents.