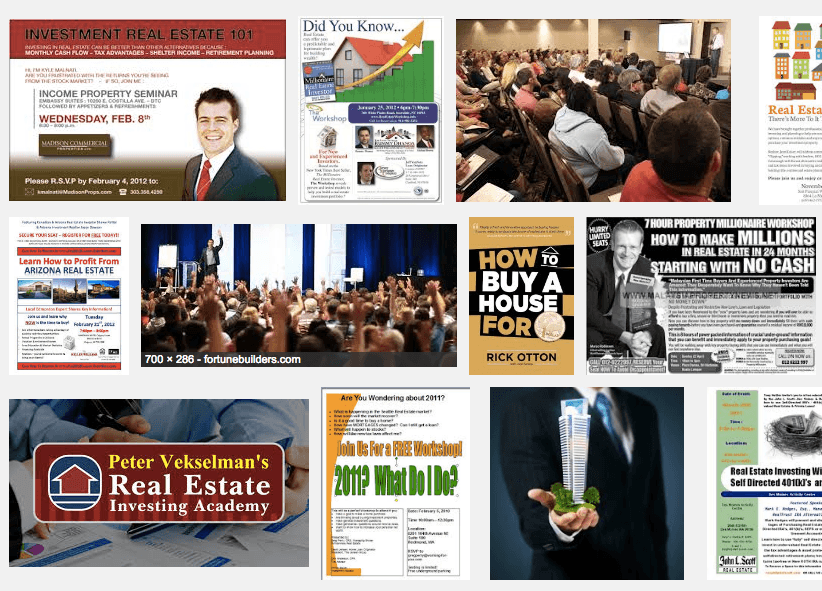 With all the news about the alleged fraud committed by Trump University, and how it ripped off unsuspecting victims, I wonder if any modern day journalists know that the Real Estate Investing Seminar industry was around long before Trump. And it remains alive and well today, doing exactly the same thing Trump is accused of. But if all you know is what you read and see on the news, you’d think he was the first and last.

I think another one will be here next week. Do a Google search for “real estate investing seminar Austin”, then click on images in the results, and you’ll see something similar to the screen shown here. And you’ll see plenty of paid ads meant to capture your interest and take your money.

Should you attend a real estate investing seminar? Probably not.

I won’t claim that all real estate investment industry education is bogus. In fact, I purchased the Carlton Sheets video tape and workbook series for a few hundred dollars in the early 1990s. I was a sucker too (or was I?). More on that and how it actually helped me in a minute. 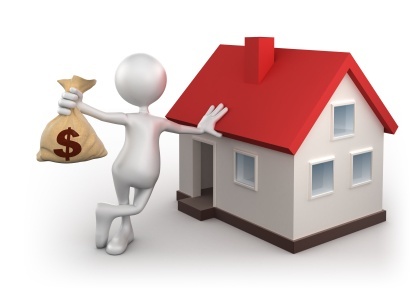 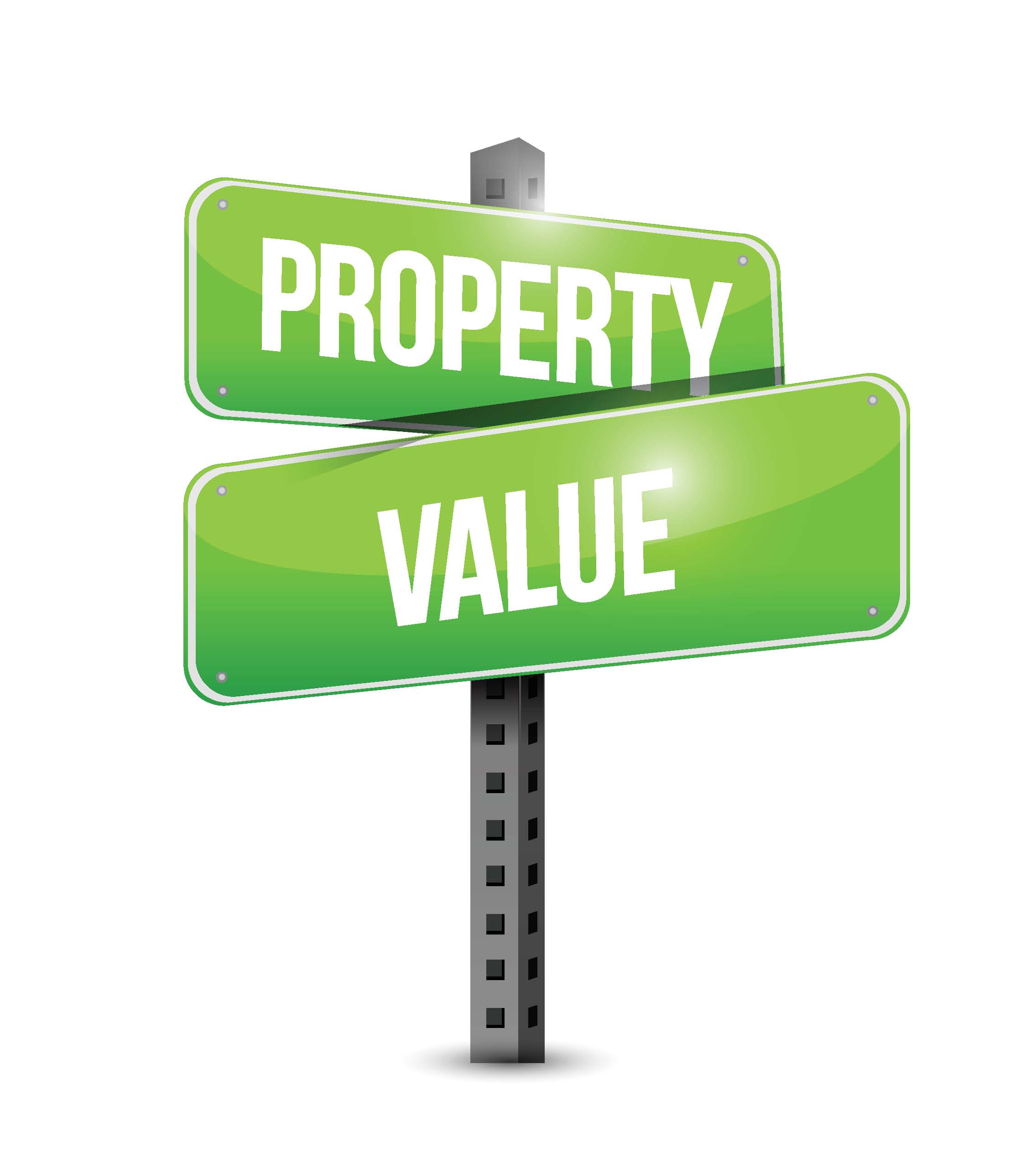 I previewed some real estate listings today that I wouldn’t own for free. These were condos in SE Austin priced in the $30Ks range. I’ve seen these listings online and I know the area, but curiosity finally got the best of me so I went and had a look to see just how bad a listing has to be to be priced in the $30Ks.

I don’t like condos in the first place. Yes, condos have their place in the spectrum of real estate product, but I don’t like owning or managing units with shared walls. I’m especially averse to not having control over water leaks from above or the sides. If a tenant calls and reports a leak coming from the ceiling in a single family home, I make 1 phone call to my roofer or HVAC guy, depending on the type of leak, and the problem is solved.

With a condo leak, I have to deal with the HOA and/or find out who owns the unit above and hope they make the proper and permanent fix to the problem. I don’t like that scenario because my action choices don’t have defined outcomes. I have to rely on someone else to cooperate in a competent way. There are also the issues and disputes with neighbors over parking and noise, neither of which come about with houses.

Nonetheless, how bad could it be that I would say “no thanks” even if (hypothetically) someone offered one of these condo units to me for a purchase price of zero? One word. Exposure. Exposure to risk. I don’t like certain types of risk.

It’s getting real hard to write about the Austin real estate market when month after month it just keeps doing what is expected, treading water overall, doing well under $200K, especially close in, and still soft in the $400K+ price ranges. That really sums it up, month after month. At the beginning of the year I predicted Austin would be down 3% to 5% overall this year, and we’re still on track for that.

For July, the average sold price compared to July 2008 is down about 4%, a bit more than the 3% average we’ve been seeing each month, but not a surprise. Median sold price is down 1.5%. Average price per square foot is down 5% from a year ago. Days on market is up to 71 average and 44 median, which are not bad numbers, but still worse than a year ago, which was worse than the year before. See the chart below for the previous month and pevious year comparisons for July.

The year-to-date chart is below. For the year Austin Average Sold price for houses is down 2.96%, median is down is dead even at 0% change, and average price per square foot is down about 5%. Our “not sold” are holding at 42%. See below for the details

The Austin real estate market continues to chug along in a manner that would be considered unimpressive if not for the fact that it was expected to be doing so much worse by so many. Average sold prices are down about 3.5% and the Median is down about 2.25%. We’ll take take that. I’m not complaining.

One interesting thing to note is that the “Not Solds” have dipped down to 38%, barely higher than the 35% for the same month last year. This is the first time the Pending/Withdrawn listings (not solds) have been less than 40% of the total departing Austin MLS listings since June 2008, when they represented 37% of the departing listings. We hit 61% in Jan 2009 and 62% in Nov 2008, which meant a lot of sales efforts were ending in failure last fall and winter, but things have improved a lot since then.

Personally, Sylvia and I have 6 closings this month and we are really, really busy. It’s starting to feel like 2006/2007, but the numbers don’t look like 2006/2007. We’re running really fast on our hamster wheel, but putting together transactions that stick is as hard as ever.

Below is the Year to Date (YTD) chart for Austin, followed by several other charts and graphs that will bring you up to date on current conditions in the Austin real estate market.

Since the end of WWII, rent prices in the U.S. have run parallel to relative sales prices consistently over time. By this I mean that a $60K home would normally rent for about $600 per month, or 1% of its sales value. The chart below illustrates the gap in sale to rent value ratios that has developed over the past 10 years in Austin in a certain class of home. I limited the stats to what I believe is the “meat and potatoes” or “bread and butter” rental stock. Those are homes between 1400-2200 square feet in size, minimum 3 bedroom, 2 bath, 2 car garage and a maximum 4 bedroom, 3 bath, 3 car garage.

Of course there are rental properties outside these parameters, but for an investor following the approach we follow – to stick with good, basic homes that will always attract good average renters –  these are the homes that accomplish that. So the chart below shows both sold and rented homes in Austin that fall into the above profile of basic rental stock. What we see above is that sales values essentially ran away from rent values in the early 2000s in Austin. In 1999 and 2000, the ratios for typical rental stock were holding to historic ratios.

Our sales market would have taken a larger dip after 2001 were it not for the investors fleeing the dot.com tech stock bust and turning to real estate. Also, we had home owners unable to sell and turning to leasing instead, which created excess rental inventory and drove down rent values.

The big question is, will these lines ever converge again, and if so, will it be because rent values increase or sales values lag until rents catch up again? Or a combination. Or, alternatively, is the old rule gone forever and rent will continue forward in our lifetimes at a ratio of about 0.75% of sales value instead of the historic 1%. How does this affect the viability of real estate investing in Austin long term?